A Beery Day in Chester

A couple of weeks ago we’d arranged to go and visit some friends in Wales, where they live isn’t too far from Chester so we hopped on the bus (not bust ;op ) to go for a look around. I wasn’t sure what to expect in terms of pubs and beer so arrived with an open mind but secretly hoping to find some treats. 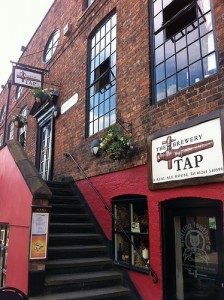 The Stairway to heaven...

Pretty much straight after getting off the bus I spotted a sign promising 4 cask ales and a husband creche, I liked that idea but apparently we had to do some sightseeing before I was allowed a beer. As it happens there was some sort of Roman gathering on which meant there was all sorts of demonstrations, activities and staged battles going on, It was quite interesting and a little surreal, if nothing else it killed a wee bit of time.

We were soon coerced into a trip on the peddalo’s and after half an hour of paddling up and down the river in the sun we were gagging a pint. First stop was the Brewery Tap, a really cool little bar that’s positively ancient inside, It’s an old Jacobean great hall which has a whole load of history (you can read about it here). It had a great atmosphere and was a lovely setting to sink a few beers, of which it seemed to have a good range and an excellent range of whisky although it was too early for that.

We each got different beers, I plumped for the Redwood from Woodlands Brewery, It was a good solid bitter, plenty of character and quite dry in the mouth.

Next up was the Marlborough Arms, It wasn’t on the semi planned pub crawl but as we were passing I clocked a couple of handpulls and a couple of huge boards listing the excellent selection of bottled ales…everything from 3 Monts, Orval and various fruit beers to things from further a field like Anchor beers. It still being a little early for any of the high ABV Belgian stuff I decided on a pint of Stonehouse KPA, or Kiwi Pale Ale, brewed with Green Bullet hops it’s light, herbal and grassy, really thirst quenching and at under 5% a great session ale…I could have quiet happily supped this one all day.

While we were in the Marlborough Arms I had a tip off that the Mill Hotel had some great beers on so we dragged the girls over there to see what was on. On arrival we were greeted with the rather surreal situation of 16 handpulls in a bar under a hotel and next to the spa…very strange indeed. 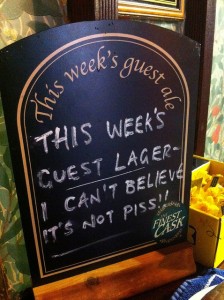 This one made me chuckle..

After a quick look along the rather crowded bar I noticed they did tasting trays, so promptly ordered one containing Ossett Silver King (an old favourite), Roosters Spearmint Mild and Weetwood Best, on receiving the tray I was pleased to see the bonus of a small dish of mini cheddars accompanying the beers in the tasting tray.

The Silver King was on top form, always a beer I could drink pint after pint of, the Weetwood best was interesting and a new one to me, the Rooster Spearmint Mild, smelled more of mint that it tasted but it was certainly worth giving a go and unlike everyone else at the table, I enjoyed it.

Time before our dinner reservation was now running short so we only had time to visit a couple more pubs, Dan suggested we head to the Old Harkers Arms which was just along the Canal.

Yet again we were presented with a great selection of ales in a rather cool surrounding, I loved all of the books on the wall. I wanted to try the Hawkshead Citrillo but then I realised I was looking at the coming soon board. Dan then clocked his favourite beer of all time, Weetwood Ambush so I thought I better try it. It was a great example of how good goldings hops can be used when done properly.

Our final pub before heading for some grub was The Albion, we were greeted by a rather grumpy (yet slightly amusing sign) listing all the “rules”, a bit of harmless fun I guess but it could put a lot of people off. Stepping inside was like stepping back in time, into someone’s living room, it smelled of home cooked food and was full of old memorabilia and signs. 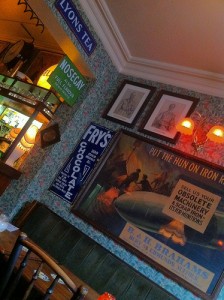 The first thing I noticed behind the bar was the great range of whisky, this seemed to be a common theme in all the pubs that we visited and on my next trip to Chester I will certainly be back to try some of them out. Anway back to the beer the best option in the Albion seemed to be the Butcombe Mendip Spring, which was sat near another one of their signs…this one did actually make me laugh out loud.  The beer was light, fruity and had a nice grapefruit zing to it.

Food was next on the agenda and was absolutely fantastic, we went to an American Smokehouse called Hickory’s, which not only had an amazing array of tasty food (you can read a bit about it on my other blog) It also had some fantastic beers which included a couple of local ones and then some from America, as soon as I spotted the Goose Island Honkers my mind was made up. It’s a great beer and one of my favourites from Goose Island, It even stood up to the crazy spice on the Suicide wings I had as a starter.

And that was it, my final beer in Chester was one from across the pond, just as well it was a good one. Chester was a fantastic place and we didn’t even scratch the surface of the pubs available, I will most certainly be going back soon. It just so happens it’s pretty much on our way to Wales, which makes  it a handy stop off place when we return to do some more walking and try some more of the beers I had over the next couple of days, which you will be able to read about on here soon.

You can view more of my photies on flicker here.

4 comments on “A Beery Day in Chester”