A Beery Trip to Wales

After an excellent day in Chester the plans for the next couple of days included more walking that beer but that’s not to say it didn’t include a fair bit of beer. You can read about the walking here or have a nose at my photos here, so I thought I’d do a quick round up of the beer and pubs we visited here.

Day 1 on the other side of the border involved a trip to Llangollen for a bit of a wander around, a trip on the horse drawn canal boats and a shufty round the grounds of a house that belonged to a couple of historical lesbians (read about them here) it’s a lovely little village and had a couple of good pubs plus a couple we didn’t try. My pick of the bunch was the Corn Mill, a cracking pub that’s spread over a couple of levels and has a lovely little terrace overlooking the river. It had a good range of beers on including the delicious and well hopped Oddball from Offbeat Brewery and the always great Hawkshead Red. The food was great too, I had a huge ploughman’s with fresh bread, cheese and a home made pork pie accompanied by salad and some tart, crunchy picallili.

Next stop in Llangollen was the Sun Inn where they had another good selection of ales including another from Offbeat which I really enjoyed and was surprised by just how bitter it was.  After a quick try of the Purple Moose we headed back to our hosts house for tea and a bottle of the always excellent Coniston Bluebird. 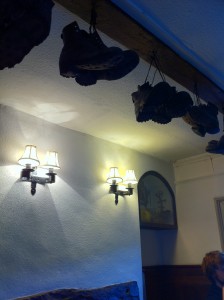 Boots on the ceiling, oxygen tanks in the alcove!

For the next couple of days the beer took a back seat as we had walking to do but of course no walk would be complete without a post walk pint, one pub we visited was the PEN-Y-GWRYD HOTEL near to the start of our walk up Snowdon, It’s a pub I’ve wanted to go to for a long time as it’s steeped in history, mainly because it’s where Hillary and Tenzing stayed whilst training for their ascent of Everest back in 1953.

The hotel has a fantastic atmosphere and was full of walkers, it had bits of climbing and Everest memorabilia scattered throughout and had a couple of Purple Moose beers on, both of which were on fine form and I would have happily sat and supped all night, the only problem being they didn’t do food unless you were staying there or had pre booked the day before, unfortunately we hadn’t done either, along with nearly everyone else in there so had to find an alternative. This turned out to be some Expedition Foods that I had stashed in the car in case we went wild camping, teamed up with a bottle of Conwy Welsh Pride.

The next bit of booze that passed my lips was the following day once we had summmited Snowdon, it came in the form of Compass Box Peat Monster from Master of Malt, knowing we still had a slippy descent I only had half of the boozy, peaty, smoky dram and kept the rest for once we got back down and were outside of our tent.

As it happened my final pint in Wales was one named after the area we had spent so much time in, Snowdonia Ale, it was perhaps my favourite Welsh ale of them ale, it was light, well balanced and stupidly drinkable, even better it was under 4% ABV so didn’t get me into too much trouble the next day.

On the way home we called in at Llandudno and I popped into the Conwy brewery for some bottles as well as picking up a few from local shops so watch this space for my thoughts on those.

I know I’ve missed a few beers and pubs out and I made very few notes on the beers I did drink, It was nice just to have some fun, enjoy the  beers and relax. From what I saw Wales has some cracking breweries which know what they are doing and make some great ales! It also has some of best food and scenery I’ve come across in a while so I will certainly be going back.

2 comments on “A Beery Trip to Wales”