A evening in an Ember Inn

Last week I received an email asking if I’d like to go and sample some of the ales available as part of the the NovEMBER Ale festival at my local Ember Inns. Not one to pass up on an excuse to visit the pub I hot footed it along the road to our local, Turners Mill. 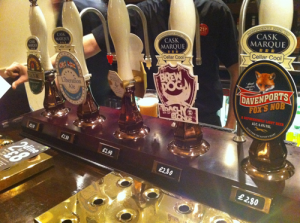 Now I will be honest I’ve not been in Turners Mill for a very long time, although over the years we have had some fantastic times in there, most notably the world cup in Japan when it opened in the wee small hours so we could have  a few beers with a bacon buttie and watch England under perform yet again. I’m not entirely sure why I’ve not been in more often, my dad goes in there quite a lot.

The pub it’s self is quite smart and trendy inside, a lot more welcoming and open that I remembered it to be. There’s 5 handpull’s, two of which are regulars (Speckled Hen and John Smith Cask) The other 3 are guest ales, in this case 3 from the NovEMBER ale festival, which even without the festival promotion, change pretty regularly from what Pete the manager was telling us. Apparently they sell a decent amount of cask ale every week so the turnover is pretty fast. Pete also told us that the punters like to try new things and aren’t scared of the higher ABV beers, which is just as well because one of the festival ales was Rampant Gryphon which weighs in at 6.2%. Unfortunately it wasn’t ready to serve so we had to make do with some of the other beers. Pete also said that they have a great range of beers to choose from so I’ve got high hopes for the future.

The pub was pretty busy and there were people ordering lots of food (which looked and smelled great, just basic pub grub but there’s nowt wrong with that) so we opted to stand at the bar.

The first was beer I went for was a Trashy Blonde (4.1% ABV) from Brewdog, In all honesty it was the best pint of Trashy Blonde I’ve ever had, it was in fantastic condition,  it was a lovely clear golden colour with a slightly hoppy floral aroma with hints of slightly sweet malt, It tasted even better than it smelled, Light, biscuity malt followed by lovely floral notes and a delicious bitter bite at the end. Great stuff. 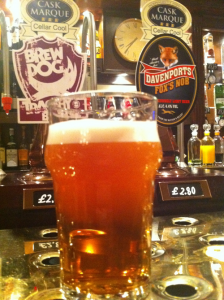 Next up was Liberation Ale (4% ABV), which I’d never had before, It came all the way from the Jersey Brewery, It’s a nice light, pale, bitter, brewed wtih Hallertau and 2 different Goldings, It’s got a real grapefruit and orange taste with a mild bitterness, not quite as punchy as the Trashy Blonde but still a pretty tasty beer. Like the Trashy Blonde it was also in great condition.

Finally I tried Davenport’s Foxes Nob 4.4%), A beer I had only ever had in bottles before. This was the darkest and strongest of the 3 beers, it was by far the maltiest of the beers, quite rich and fruity, with hints of plums and raisins, there’s a decent bitter finish too, much more pronounced than the Liberation but not as aggressive as the Trashy Blonde, to be honest it wasn’t quite my cup of tea and a half was enough for me.

We finished the night with a pint of Trashy Blonde (First pint my dad has bought me for ages), before heading home for an early night.

My one criticism would possibly be the festival tasting booklet, It would have been nice to have had a few more notes in there, maybe a bit more about each brewery and some space for writing your own notes would be good, maybe even some sort of place to collect stamps to get a free festival glass or something. Definitely one to think about.

Big thanks to Ember Inns for arranging the tasting, huge thanks to Pete and the Staff at Turners Mill, who were welcoming, friendly and knowledgeable. I’ll most certainly be heading up there again soon.

One comment on “A evening in an Ember Inn”