Posted on December 1, 2010 by andyMogg in Adnams, Beer Reviews 3 Comments

A few months ago Adnams released a Handcrafted Ales selection case, it contained 6 bottles, 6 different styles from around the world, well that was the plan but they were out of one of the beers so It was replaced by a second bottle of the American Style IPA, the case also included A Kolner, Dry Irish Stout,Wit Beer and a Wheat Beer. It cost about £17 including delivery (if my memory serves me correctly). I love the design on the box and bottles, it’s a bit different from the traditional Adnams branding but sits nicely alongside their core range. 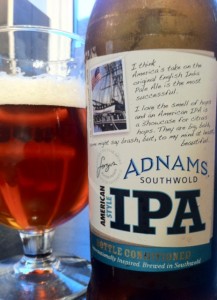 Delicious, well balanced, up there with the best!

It pours a lovely clear copper colour with a big foamy off white head, it’s smells delicious and kind of how you would expect from a c-hopped IPA, citrusy grapefruit and lemon zest and some orange. The body was lovely and smooth, with less carbonation than the head would suggest.

Adnams American IPA is a fantastic beer that I think punches above it’s weight at 6.8% it’s sublimely drinkable and will get you into as much trouble as Innovation, this puts it up there with Innovation as my favourite Adnams beer.

It’s beautifully well balanced, not too hoppy, not too malty and with just the right amount of carbonation it’s great for when you want a hop fix but don’t want your brains blowing out with huge massive hop kicks.

Hat’s off to Fergus and the guys over at Adnams for trying something different, unfortunately I’ve now drank the second bottle so I’ll have to start on the other beers in the case.

You can buy the beers here, follow Adnams on twitter here, read my Adnams beer reviews here, or read the Meet the brewer with Fergus here.