Posted on November 2, 2012 by andyMogg in Adnams, Beer Reviews 6 Comments

I’ve tried Adnams Ghost Ship on a few different occasions and really enjoyed but never thought it was an outstanding beer, that was until I cracked open the canned version.

The first thing that hit me was the aroma, It smelled super fresh and packed full of hops, load of pithy lime and lemon, it really jumped out of the can and the aroma was so much more pronounced than I remember the bottle or cask versions being.

The freshness and extra zing was also in the flavour too, the hops really did stand out against the lovely, traditionally Adnams malt backbone.

I wasn’t sure if it was all in my head or not so I mentioned this to @Solebear on twitter the the other day and he said they’d dry hopped the canned version a bit more which I’m guessing is why  the hops spurng out of the can as much as they did.

I actually think this is up there with Innovation and the American IPA with my favourite Adnams beers, I just hope that one or both of them make it into cans sooner rather than later as I could see my self buying a lot of them as my go to beers and beers for wild camping trips in the summer where cans really do come into their own over bottles. 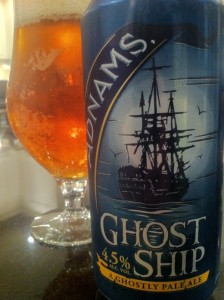