I’d been trying to track this beer down for a while, but the problem was the only places I could find it were places that sold it in cases of 12 and as I wasn’t sure if I would like it I had always put off buying it.

Then the very kind guys over at Adnams said they would send me some to try, it arrived a few weeks ago and I have since polished nearly all 12 bottles off…I did give a couple away to friends to try and their opinions are included below. 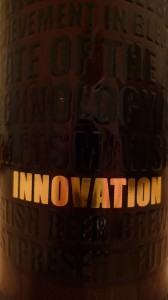 Innovation is  Adnams version of an American IPA, it weighs in at 6.7%  and is brewed with blend of hops from England, Slovenia and America (namely Boadicea, Columbus and Stryian Goldings), Innovation was originally brewed to celebrate the opening of Adnams new brewhouse but was such a success it has been brewed again.

Innovation has won lots of awards, Gold In the BBI awards, first in it’s class at the world beer awards and most recently got a gold star in the European Beer Star Awards 2009.

The beer comes in a lovely bottle, it has a kind of embossed with the word Innovation in gold, this definitely gives the beer a premium feel. It is also apparently quite eco friendly too as it takes 30% less energy to produce than most beers.

The beer it’s self pours a lovely golden copper colour with a lovely head, the aromas were of pine, a little hint of floweriness,  hops and lots of citrus with a hint of sweetness.

What I wasn’t prepared for was just how good the beer tasted, it was packed full of flavour, it starts of quite sweet with the hints of toffee and malt, then comes the bitterness in the form of a lovely resinous hoppy flavour and plenty of the citrus that you got in the aromas, the flavour lasts a good while in your mouth too. What was really amazing was just how light it was for a beer knocking on for 7% ABV.

I’ve tried it with curry, chilli, cheese, steak and plenty of other stuff, it goes really well with all of them equally as well.

As I mentioned it earlier I gave a couple of bottles away to friends and family, the general consensus was that it was one of the best beers they had all tried, they were all also surprised at the amount of flavour and how drinkable it was for 6.7% as they were mainly used to drinking session beers of 4-5%

If you want to try it (and I know you do) you can buy it from Adnams or now in single bottles from beermerchants.com for around £2.70 per bottle….well worth it and I for one will be buying another case once I have room for it in my beer cupboard…. Adnams Innovation is one of my ales of the year that’s for sure.