Tally Ho is a limited edition Barley wine style beer, brewed at Adnams since 1880. It’s traditionally a Christmas beer which is brewed in October in limited quantities.

I was very kindly sent my bottle of Tally Ho by Sean at Adnams who offered to send everyone involved in Beer Swap a bottle to try. 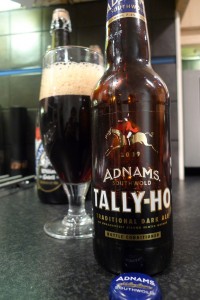 I finally got round to drinking it a couple of nights ago when I was in the mood for a deep dark barley wine style ale so out came the Tally Ho.

It comes in a rather cool little bottle with a lovely traditional style label and It weighs in at 7.2% ABV, It pours a lovely deep dark brown with an almost red hue to it, it had a decent head which surprised me as the reports from other bloggers were that it was almost headless and in some cases completely headless, I wonder if they maybe had their bottle a bit too chilled as mine was at room temperature.

Tally Ho smells exactly as you would expect, dark roasty malt with a hint of smoke, lovely sweet  dried fruit and just a hint of spice, perfect for a cold snowy evening in front of the TV.

It tasted fab, it felt almost silky in the mouth, the roast malt and fruit from the aromas came through into the taste along wtih the spice and a bit of pepper, there was also a sweet almost dark chocoaltely flavour.

Not only had the head surprised me but just how drinkable this was also surprised me, it was amazingly light for such a deep dark beer and is something I could see my self drinking regularly. However, and I can’t believe I am saying this, I do wonder if Tally Ho would benefit from being laid down for a few months before drinking, It’s not something I can usually find my self doing but I might just have to order some to try it with.

Big thanks to Sean for sending it to me!