It seems like so long ago since I jumped on the train heading for Sheffield, but looking at the calendar it was only on Saturday, I can only put this down to either some sort of spacetime continum or a monumental hangover, which led to a couple of days of being dazed and confused.

You will no doubt read many reports of what did and didn’t happen between 11:00 on Saturday 23rd and 17:30 on Sunday 24th January 2010, these will more than likely differ from blogger to blogger, but one thing I think know they will all have in common is that everyone had a fantastic time (well, apart from Mark at Real-Real-Ale-Reviews – who was maybe feeling a little guilty over “keygate” – you can read his version of events here). 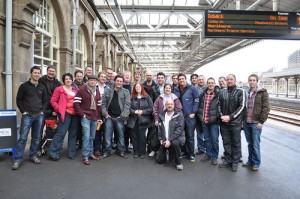 What a bunch of twissers

The epic began just after 11:00 when I arrived, after a rather crappy train journey, at The Sheffield Tap, a rather fancy new pub based at Sheffield station, which over the weekend was to almost become our second home.  While I waited for other bloggers to turn up I quietly sat in the corner of the bar, slowly supping a rather delicious glass of Thornbridge Kipling, this was the start of  what, will one day surely become a pub crawl that is etched into blogging legends or as someone mentioned on twitter, become the face of a new alcohol awareness campaign.

Just as I supped the last fruity and hoppy mouthful of my Kipling, Steve  aka Aletalk wandered across and asked if I was Chilli Up North, perfect timing – it was now his round.

Before either of us had finished our beers (I had a Thornbridge White Swan and I think Steve went for their Lord Marples) Dave and Ann appeared, they’d been in Sheffield since Friday as they had a long way to come from the Woolpack, as the beers went down, more and more bloggers were appearing as their trains pulled into the station, before we knew it the place was packed, people had really pulled out all the stops, coming from far and wide to meet their fellow twissheads!

After a few more beers were sank, travel stories shared and gifts exchanged (beers/chilli seeds/some rather lovely glasses from Alex at All Beer) we were shepherded outside for a quick photo, before heading off to the next stop on the Twissup Map.

In truth a certain person who shall remain nameless took us on a slightly longer route that detoured by the Harlequin pub, after a couple of swift halves in there we moved on to the Kelham Island Brewery where we had the rather delicious Marble Brew 14 and a whistle stop tour of the brewery before heading to the Kelham Island Tavern for some Thornbridge Samhain, Milton Marcus Aurelius and one of my beers of the day Brew Co Pete‘s Ginger Stout. 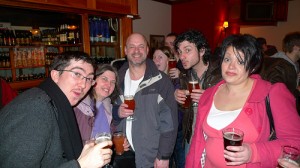 Ruination in the Devonshire Cat

Next on the agenda was a tour of the Sheffield Brewery, a couple of beers in there and a chat with them guys before onto the Hillsborough Hotel, where we were subjected, sorry treated to a brewery tour by Crown Brewer Stu, here we supped more beer, had a hastily arranged beer swap and I got to watch Ring of Fire 2009 being tapped, this is the beer I helped Stu brew and used my home grown chillis in. It seemed to go down really well, Mark Dredge has even given it his beer of the day (WHOOP).

The atmosphere in the Hillsborough was possibly the best of the day, great banter, great beers (including Thornbridge Equinox and Crown Samuel Berry’s Pale Ale)

From here we split into two groups, some went to watch 22 fellas kicking a ball around a pitch and the rest of us headed via various modes of public transport to The Rising sun for a couple of beers and some much needed sarnies, Kelly from Thornbridge‘s competitive side came out here when he scoffed the majority of the tray of sarnies that myself and Pete B found on our table.

Our stomach’s thinly lined with sarnies we headed down the the Devonshire Cat, here we found the awesome Stone Ruination IPA on, it wasn’t cheap at £2.80 for half a pint but it really was worth the money, here I also tried my first non beer drink since breakfast, a rather tasty rum that was packed full of vanilla and nougat flavours (thanks to Brew Co Pete for letting me try that)

It was now getting to the time were some unfortunate people had to get the train home so we headed back to the The Sheffield Tap where yet more ale was consumed from both cask and bottle, This included Hop-it, Tokyo*, Jaipur and various other beers and beer styles. 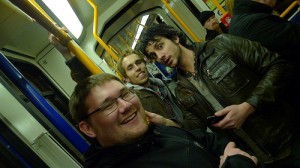 Twissup on the tram

Once we had waved those unlucky few off we went in search of food, somehow we ended up in a kebab shop that resembled a fancy dress shop, which sold a strange array of battered products which were mainly thrown in the bin.

Those of us that were staying at the Hillsborough headed back there, where a certain person broke someone else’s key in the door, leading to a few room changes and a lot of ribbing for Mark at Real-Real-Ale-Reviews and a rather funny (if inconvenient) end to day one.

Day two started with most of us feeling a little worse for wear, this being helped by the brilliant breakfast served up at the Hillsborough before packing our bags and heading off to see Zak Avery in Leeds.

Zak had very kindly arranged for a pin of experimental beer from local brewer Roosters to be waiting for us at his shop, It was delicious and just what we needed to get the day’s drinking started, although I think it may have sent Pete B over the edge. I think everyone bought a few beers from Zak which is almost impossible not to do.

Next off we headed off in the Wooliemobile to North Bar in Leeds, for yet more ale and some great cheese made by the bloke from blur who used to drink rather a lot of booze in his wilder years…quite fitting and bloody delicious, this was quickly followed by a couple more rounds of cheese and bread and meat and bread, all pubs should do this, it’s a fantastic way to soak up the booze.

Up next was some Sam Smith’s OBB in a rather unfriendly pub hidden down a back alley, promptly followed by an Ilkley Brewery Mary Jane before myself, Pete B and Mark D headed for our train back to Sheffield, luckily on arrival back in Sheffield we had time for one last pint in the The Sheffield Tap, I went for Kipling again, It seemed fitting that the beer I had first should also be my last.

Thanks to all that turned up, chatted, drank, swapped beer, gave gifts and organised treats and tours along the way, I will be sure to raise my next glass of beer to you, although that might not be for some time..

Thanks to steelrazor for taking some awesome pics, You can view my photos of the event here and some other pics in the Twissup flickr group