Friday night we went out for a meal with a group of friends, it’s been planned for months now as it’s hard getting everyone together, not to mention getting a table at the pub/restaurant we wanted to go to. So it was really great when we turned up at The Board  Inn in Lealholme and saw a big sign outside that said they had a beer festival on as part of Cask Ale Week

Real Food, Real Beer and Real Fires - what more could you want?

They usually have  a great selection of hand pulled ales (not to mention the 60+ types of whisky) so for the beer festival they had set up an extra few casks in the lounge, bringing the total number of ales to around 14, not bad for a pub in the middle of the North Yorkshire Moors.

As it happened we arrived a fair while before out table was booked for so we had plenty of time to work out way through the ales, I started with  a Timothy Taylor Landlord, mainly because it is one of my favourite beers but also because I had never had it on Gravity fed before, only on hand pull, so I was interested to see how it compared. It poured the same lovely golden colour that a good pint of Landlord should always pour, but unlike the hand pulled version it lacked any real head, the aromas weren’t as strong as I recall being, in contrast the flavour was huge, it really brought out the caramel and hops, absolutely delicious, Emily said she preferred it with a head..but she says that for all beers.

Next up was a pint of Dixon’s Hoppy Daze from the Riverside Brewery, it poured a lot darker than I imagined it would, it came with a decent head despite being gravity fed, it was malty and hoppy with hints of bittersweetness, very drinkable indeed. This was shortly followed by a pint of Hipperty Hop from Hambleton, I wasn’t expecting much from this one, as much as I love Hambleton’s regular beers the last few seasonal ones I have had have been pretty terrible, but a few people had said it was a decent pint so I thought I would give it a go, it turned out to be really good, nice and light, hoppy bitter and quite fruity, Hambleton Ales back to their best.

This was the beer I chose to have with my meal, Starter of mixed meat platter and home made chutney, it came with a big hunk of bread and was the perfect way to soak up some of the beer, Next up was my main course of roast pheasant with plums, it was rich deep dark and delicous, the hops and bitterness from the beer cut through it perfectly, top stuff. 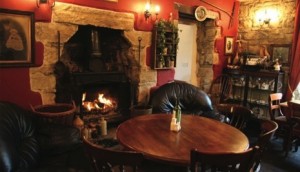 It them momentarily went down hill a little, I ordered a pint of Rydale Winters Tale, it was really roastsy and malty, overly roasted in fact, so much that I didn’t manage to drink more than a few mouthfulls. Things soon picked up when dessert came, Iced Ginger Parfait with Ginger Snap Basket – spicy, sweet and light – top stuff.

All the meat and produce is sourced locally and the chef really does show what you can do with it, the menu had loads of interesting meals on which made it quite difficult to pick what to have.

We had a great night, the pub was lovely ,the food was fantastic, the service was relaxed, fast and friendly and above all the beer was great. We shall most certainly be making The Board Inn one of our regular pubs.

If you fancy popping along it’s not far from Whitby, you can visit their website here. (the images I’ve used on here were borrowed from their website so please take a look)