Posted on February 17, 2011 by andyMogg in Badger, Beer Reviews 1 Comment

This week was one of those weeks I was trying not to drink on a work night, unfortunately I only lasted until Wednesday night and surprisingly it wasn’t the canned Brewdog Punk IPA that had arrived earlier in the week that tempted me into breaking my abstinence, it was a a bottle from the case of Badger’s seasonal ale, Hopping Hare that Badger had very kindly sent me a couple of days earlier. 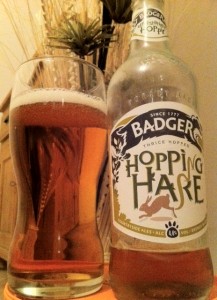 Badger were one of the first beers I started drinking, mainly because they were easily available in all of the supermarkets I visited. Some of them even did the seasonal bottles which was great as I loved getting my hands on anything new or different.

The first thing I noticed when Hopping Hare arrived was that the branding and bottles had changed quite a lot from last time I’d seen it, The label was cleaner and a bit more modern, which I like, the bottle  on the other hand was clear, this I’m not a fan of as I’ve never been a fan of clear beer bottles, they just don’t look right. I also love the use of the phrase “Thrice Hopped” Thrice doesn’t get used enough these days.

Hopping Hare poured a lovely warm golden colour (although I could already see that through the clear bottle) It had a decent foamy head. The aromas reminded me of the first day after winter when I cut the lawn, fresh cut grass and spring flowers, there were hints of lemon zest and a little bit of sweetness in there too.

In the mouth it was crisp and clean, The first few mouthfuls were packed with tangy, fruity lemon flavours followed by a slightly sweet toffee malty taste that then mellows into a really lovely lingering bitterness. A perfect partner for the spicy Mexican veggie burger I was munching while drinking the beer and trying to make notes.

As the beer warmed up it seemed sweeten with the toffee notes becoming more prominent, possibly a bit too much, but served at the correct temperature, Hopping Hare lives up to the “Bound to Satisfy” tagline.

Badger seem to be one of those breweries that split opinion, I’ll admit there are a couple of their beers I don’t particularly like but for the most part I’m a fan, Tangle foot in cans is fantastic for wildcamping trips, Golden Champion and Golden Glory are two fantastic summer thirst quenchers and i’m partial to the ginger kick in Blandford fly too,  hopefully over the coming months you’ll see some more of their beers on here.

If you want to give Hopping Hare a try you should be able to find it in supermarkets soon, failing that you can order it from the Badger website here. You can also follow Badger Ales on twitter here.

EDIT: GOOD NEWS I’ve just been informed that Hopping Hare is no longer a seasonal beer and will be available all year round