Barngates Brewery is a brewery a I first came across a few years back when I was in the Lake District, looking for a few beers to take back to our tent, the shop had a few bottled beers all by Barngates so I bought one of each.  This was long before I started blogging about beer, but as it happens, one of the beers I bought that day has become a regular in my beer cupboard, this beer is Barngates Red Bull Terrier. 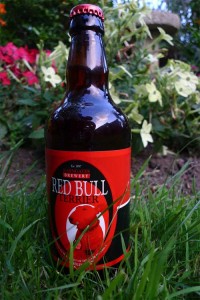 Red Bull Terrier is named after the brewer’s first dog, Brutus, who just happened to be a Red Bull Terrier. The beer weighs in at 4.8%, it is marketed as a full bodied winter ale and has won plenty of awards over the last few years, I can see why.

It pours a lovely dark, rich copper colour with a lovely sweet malty aroma complimented by hops and a hint of peppery spice, the head was pretty decent and lasted well down the glass, although I was drinking it from a half pint glass and topping it up.

The flavours are well balanced, sweet caramel malt a little bit of fruit then a lovely floral hop bitterness in the finish that gave it a rather tasty and refreshing edge.  For me it is one of those beers thats instantly loveable, nothing complex just really well brewed and something I want to drink over and over again.

It goes really well with steak and ale pie, cumberland sausage, cheese on toast and various camp foods that we have been eating while sat in the middle of no where drinking local beers and watching the sun go down.

I’ve still not managed to try this on cask but all of the other Barngates beer I have tried has been of a similar level and all been pretty consistent, although having said that Red Bull Terrier is still my favourite.