I think the average for a standard cask beer round here is about £2.30 although I’ve seen them up to £2.75 per pint in a couple of pubs. Having said that I have paid more in places like the Sheffield Tap and The Fat Cat, not to mention bottles at home, For me there is a limit on how much I am willing to pay but if something is great and it’s a treat then why not pay that little bit more..

The press release also ties in quite well wtih the American Craft Beer Night on Friday the 6th of August wiht some pretty special beers available.

Press release is as follows: 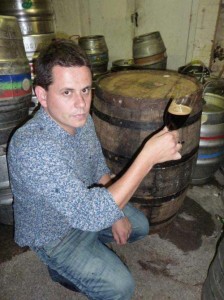 Dan Fox of the white horse

Recent July 4th celebrations at the White Horse on Parsons Green saw five hundred and seventy six half pints of special American ale sold at £6 per half pint.

The black, treacly beer, Goose Island’s Bourbon County Stout, sold out within two days. Aged for 18 months in a 36 gallon wooden bourbon cask in its home town of Chicago, it had been shipped by the pub as part of its annual American beer festival.

Last month, another Goose Island beer – Goose Island 312 “ was exchanged by President Obama with Prime Minister Cameron for a bottle of his home town’s Hobgoblin ale. So the President obviously appreciates craft brewed American beers as much as my regulars in London.

Many in the UK still believe that all USA beers are always light in colour and flavour, and big in carbonation and fizz. But there are 1450 craft brewers now in the US, and they are a brave lot. They are reinventing the past to make a really exciting range of flavours for modern palates, and for modern stronger flavoured foods.

They are afraid of nothing. So whereas many in the UK believe that open-vented cask ales are the only way ahead, American brewers have rediscovered the many quality and consistency advantages of the sealed keg. The Watney’s Red Barrel of the 1970’s may be derided now, but it fulfilled a need to have the often ill-kept beers of that time served in a more consistent fashion. Rediscovering the keg allows us to bring in a wide cornucopia of America’s most exotic beers including wheat beers, fruit beers, rich barley wines, smoky porters, toffeeish ESBs (Extra Special bitters) and hop heavy India Pale Ales.

â€œAmerican lagers and ales are expensive to bring across the Atlantic, and their generally higher alcohol levels attract more duty; but their beautifully defined flavours have allowed us to price them more like wines, served often by the half pint and in special glassware.

Dan Fox of The White Horse, Parsons Green, with Goose Island’s Bourbon County Stock The pricing of our bottled American ales ranges from £4 to £22 a bottle, and our customers are guided more by quality and interest than they are for price. If Champagnes can range from £8-£200 a bottle, it seems illogical that all beers should be priced equally regardless of quality or heritage.