Last night I was due to go to the Saltburn Beer Festival, I had been looking forward to it for months, especially as I had seen the beer list and it contained some beers I really wanted to try.

I had originally planned to go on the Friday but a family engagement cropped up so I ended up missing it, never mind I thought, I still have 2 tickets on the door for Saturday.

The low and behold an hour before we were due to jump on the train I got a phone call to say that the festival had nearly ran out of ale and it was pointless going unless we could get there within the next 30mins or so.

I was fuming to say the least, after all how could a beer festival run out of beer so early? Especially when I had pre booked my tickets? Now i’m not sure who should have learnt their lesson from last years beer festival – it too ran out of beer after the first night, leaving only the beers that no one wanted to drink for the following day, should I have learnt my lesson and gone on the Friday or should the organisers learnt and ordered more beer or possibly changed the ticketing system so that they could predict how many people were going and order the correct amount of beer?

Now I know that the organisers are all volunteers but I sometimes wonder if the could organise the proverbial piss up in a brewery.

After the cancellation I was at a rather loose end and ready to go out, so I stocked up the fridge with some beers and dragged Emily to our local Weatherspoons, giving the beers time to chill, after all it was their “Beer Festival”, it maybe didn’t have some of the more exciting beers I had been looking forward to but at least it had a few new ones. 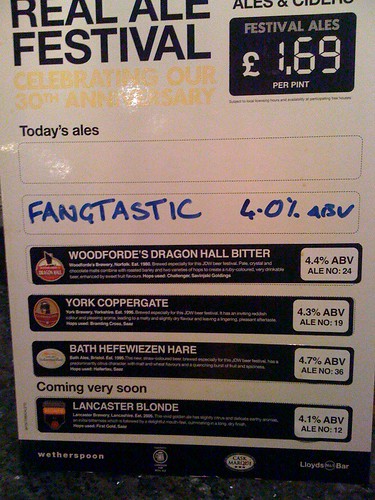 I ended up trying all of the above before heading home,

Hambletons was possibly the worst of their beers i have tried, it was weak and had a really weird after-taste, I was very surprised at it as the usually make some cracking cask ale, Moorhouses tasted like antifreeze, so that wasn’t great  The Bath one as lovely, light and summery, not quite a full blow weisse beer but very drinkable, the Dragon Hall was a lovely traditional session bitter and the York Coppergate was pretty tasty too.

It was quite interesting trying the Woodfordes Dragon Hall as the only beer of theirs I have had was in the form of their home brew kits.

We also managed to sneak in a “gourmet” beef burger, giving the beers in the fridge a little longer to chill.

On returning home I set about drinking the Innis and Gunn Christmas Gift Pack (review soon) which contained their new IPA, Original Oak Cask and Rum Cask beers, these were quickly followed by a Sierra Nevada Celebration ale or 2 and an Adnams Innovation (all of which I will review soon)

The stars of the night were  – Dragons Hall, Adnams Innovation and the Bath ale -they all put a smile on my face and helped me forget about Beer Festival Fail