Beer from Coast to Coast

Some of you will know that a couple of weeks ago I walked from Coast to Coast, St Bees Head on the West coast to Robin Hoods Bay on the East coast.

It involved over 192 miles of walking in 13 days, but this is a beer blog so you probably don’t want to know about that, if you do you can always read about it here on my Coast to Coast blog. 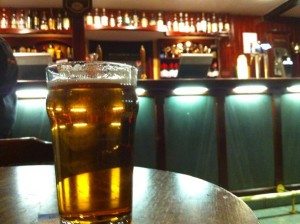 One of the major plus sides to a trek such as the Coast to Coast is that not only do you get to walk through some of the most spectacular landscape in the country and meet loads of really cool peope you get to visit lots of pubs along the way most of which serve  real ale.  I was looking forward to seeing how the beer, pubs and breweries changed from place to place, I wasn’t disappointed.

As sad as it is I can remember nearly all of the beers and pubs along the way without even referring to the list on my phone, fortunately I can’t remember how many pint’s I actually supped 54 different beers, but I do know some of the beers were consumed in multiples and that was only a fraction of the beers we came across en route, not to mention the 5 or 6 pubs we passed that weren’t open or pubs just off route that we didn’t visit, of which one was a brewery (school boy error I know). I’m not actually sure I want to know how many pints I drank because I would only end up adding the cost up and that’s when things get scary.

So how did the beer change from one side of the country to the other….well I’m not sure it did,  I was kind of expecting the styles to change from one county to the next, this didn’t happen, just when I thought I had noticed a change, say a pub didn’t have sparklers, we would go in the next one and it would. 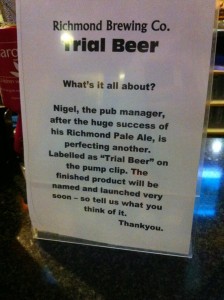 However as I expected the choices of brewery did change,  In Cumbria most the breweries were from Cumbria, In Yorkshire most of the beers were from Yorkshire, of course there were exceptions to this with both Yorkshire and Cumbrian pubs severing beers from across their borders and futher afield. Some pubs even did world beers, that one I didn’t expect.

Prices also fluctuated from pub to pub, as you would expect, a few pubs charging a premium for their location or reputation (we noticed this with shops too). The cheapest pint was an our first night at the Ennerdale Bridge village gathering, £2 for a pint of Ennerdale Darkest, a 4.2% roasty, chocolaty bitter, served from a handpull in a tent in the middle of a field…bargain.

The most expensive…well it wasn’t really a pint but it goes to Sierra Nevada Pale Ale at £3.30, in Tweedies Bar in Grasmere this was  a place I really didn’t want to leave, It had a great selection of beers on handpul and bottles from around the world in the fridge, the atmosphere was great, a mix of young and old and some rather tasty looking food. The walls were covered in pump clips from around the country including some absolutely brilliant beers. We had just missed the beer festival so that’s in my diary for next year. Oh they also did 3 1/3 glasses in a cricket bat shaped tray for the price of a pint – a great way to try the different beers on offer if time is limited.

Tweedies bar probably wins my favourite pub of the walk, closely followed by the Riverside bar in Rosthwaite which had a fab selection of handpulls along with Sam Smiths Lager and a huge selection of whiskies.  Other notable mentions go out to The Lion Inn at Blakey Ridge who’s Thwaites Wainwright was in top condition, The Horse Shoe at Egton Bridge where I supped a fair bit of the delicious Durham Revelation. We also visited the highest pub in England, Tan Hill Inn where we had a couple of beers including their very own Ewe Juice. 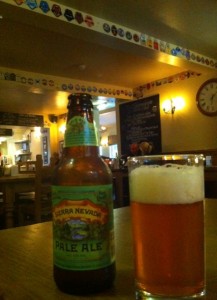 A notable mention needs to go out to Amontola curry house in Richmond, not only did it sell Cobra, Kingfisher and a couple of other Indian beers it sold Richmond Station Ale which is brewed just across the road from the restaurant and went perfectly with my curry. Not forgetting Wetherspoons in Richmond too which had a trial batch of beer on, which was also from the Richmond Brewery, not often you see something like that in Wetherpoons.

Best beer of the walk goes to Hawkshead for their Windemere Pale Ale, a 3.5% pale ale packed full of Citra, well balanced with malt and a lovely bitter finish, This is very closely followed by Thwaites Wainwright Ale for its sheer drinkability, It was really well balanced and had a great body. To be fair, most of the beers along the way were great, I was going to list them but I don’t think I’ll bother.

Wost (or least enjoyable) beer goes to the pint of John Smiths I had in our hotel in Grasmere, It was all they had…needless to say I only had the one of that, it wasn’t too bad when it was cold but after being at room temperature for 30 seconds it started to taste all eggy and yukky.

Nearly all of the beers were between 3% and 4% there was the odd one that crept up to nearly 5% and then the Sierra Nevada Pale that was over 5%.  Most of them would fall into the Bitter category with a few in the pale and hoppy end of things and a couple in the porter and stout territory. I did miss big IPA‘s for a little bit but then I realised that the last thing I wanted after a hot sweaty day out walking was a huge, complex beer, what I really wanted was a low ABV quaff-able but still flavoursome gallon.

Thanks go out to all the brewers and landlords who made our walk a big beer adventure too and a huge thanks goes out to Brodies Beers for sponsoring us £100.