A return to York has been on the cards for me for some time, so when I got chatting to Mark from Real Ale Reviews about taking a day off work and going for a few beers we decided that York would be a great place to go as it was easy for us both to get to and has a plethora of drinking establishments, We had also seen a recent report on Hopzine where a couple of other bloggers had beer for a few beers, so that settled it and we started to plan our trip.

I set up the map below so we could keep track of where we were, the idea was we were going to live blog to it during the day but we got chatting over the beers and forgot all about it.

As it happened we got there before the first pub we wanted to visit opened so we decided to head for the local weatherspoons as we knew that would be open and would be likely to have some decent beer. I got the day off to a start with a pint of Rooster’s Ginger Ale and Mark plumped for  a half of the ginger and half a tanglefoot. The Rooster’s Ginger Ale was delicious, it was light and golden, the aroma had a hint of ginger but the flavour was lovely, malty and beery with a lovely bit of ginger and a slight sweetness, well balanced and a great start to the day. Weatherspoons it’s self looked like it had plenty of ales on over time judging by the pump clips on the wall, it also had free wi-fi and was clean and tidy so not a bad start to our day.

We then headed to the Maltings, a pub that has some great memories for me, it’s hard to miss the entire outside of the building is painted black – love it or loathe it it doesn’t prepare you for what’s inside, It’s quite a small bar but what it lacks in size it more than makes up for in character and atmosphere. 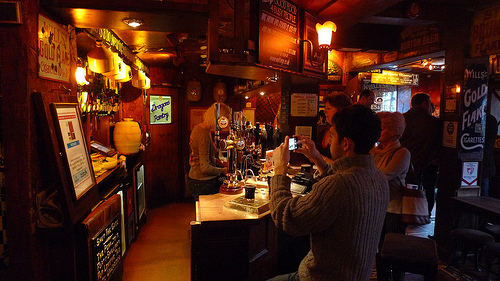 It was pretty busy so we propped up the bar, Mark ordered a half of Roosters Yankee and half a Wensleydale Black Dub (which seemed popular judging by the number of pints that were pulled while we were there), and I went for a pint of Yankee, I then noticed the Dark Star Winter Solstice pump clip hiding behind the pillar so once I had polished off the Yankee we both had a half of Goose Eye stout and the winter Solstice, followed by half of the Black Dub for me just so I could see what it was like.

The Yankee was lovely light and hoppy with flowery hints and a dry finish, a really good session beer by all accounts, The Black Dub was more of a dark mild than a stout in my opinion but it was still pretty tasty stuff, it was quite sweet and had hints of biscuit and chocolate. The Goose Eye Stout smelled almost like candy floss, it was also pretty sweet, in fact it was a bit sweet for me and quickly lost it’s head – not my favourite beer of the day. The beer that stole the show was the Winter Solstice,  it was a lovely amber colour with a decent head, It had a spicy hoppy smell which also came through in the flavour, there was also a bit of ginger in there which was a welcome addition, I could have quite happily sat and supped this and the Yankee all day, but after a chat with the rather friendly barman we decided it was time to buy a couple of their bottled ales to take home with us, he also gave us a map of pubs in York and marked his recommendations for us.

By now we were getting a bit hungry so we decided to look for some food, we ended up in the Lamb and Lion, a lovely cosy pub, as it turned out not only did they do some rather fine food (I had chicken pie and hand cut chips, mark went for gammon and eggs…both were delicious) they also had a decent range of beer including a couple what were specifically brewed for them, they were all OK but nothing out of this world, the best probably being the Golden Mane which was light and refreshing with a hint of hops! 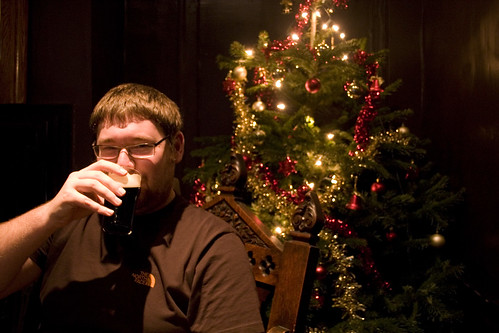 Enjoying a beer in Guy Fawkes

After this we moved on to Guy Fawkes, it was like going back in time, the decor was great, it had massive wooden tables and thrones,but it wasn’t as cosy as the last pub, they also only had a couple of ales on after running out of the others, I dare say it could be a great pub when it has it’s full range on especially as it seemed to have a decent range of bottled beers, I went for half of the house ale “Guy Fawkes” and Mark ended up with the Leeds Seasonal Ale, “Ale Mary” I quite enjoyed the Guy Fawkes, it wasn’t a stunning beer just a good old dark and malty beer, I can’t remember what Mark thought of his but I’m sure he will put it in his report.

By now time was running out and we realised we had a bit of Christmas shopping to do so we headed to The Bottle to get a few bottles of beer – we both did very well only buying 2 bottles each, Mark then had to get his better half an Xmas pressie so we headed to get that then decided to try the Golden Fleece, I’ve not been in it for a very long time and I think it is safe to say I won’t be going back in again for a very long time, It is simply the most unfriendly pub we have ever been in. The beers were pretty naff so we quickly polished them off and moved on.

The next (and final, as it turned out) bar was Pivo, this turned out to be a bit of a revelation, as soon as we walked in and saw the beer menu we knew we were in for a treat. In the end we went for half a Sierra Nevada Harvest Ale (Wet Hop) and half a meantime High Saison each, I had the meantime first and it was quite tasty but a little bit flat and a little bit cold, but the revelation of the day had to be the Harvest ale, It was simply stunning, in fact one of the best beers I’ve tasted in a very long time, fresh, hoppy, spicy and really well balanced, the only slight downer was the price…60p shy of £10 for 2 pints! Still it was well worth it. 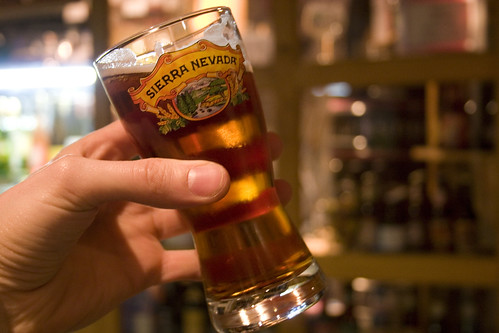 We decided we had time for one more pint before heading for the train so Mark got the round in, I can’t remember what he had but I ended up with an Outlaw (Roosters) Boneshaker and an Sierra Nevada Classic Pale Ale, the Boneshaker was a lovely IPA but it paled into insignificance compared to the Harvest, which even blew the usually tasty Pale Ale out of the water, I couldn’t stop thinking about….it had made that much of an impression.

Sadly that was it for the day, we headed off to get our train, vowing that we would do it again soon and visit the pubs that we missed out as we know York has many more great pubs that are in need of visiting.

As a consolation I decided to crack open one of the bottles I bought, The Flying Dog Snake Dog IPA, a really lovely hoppy IPA from another one of America’s great breweries, it certainly took the pain out of an otherwise dull journey home…