This beer arrived as part of my Beer Swap Part Deux box from Andrew at Bristol Beer Factory, It was another new beer to me and it was another of Andrew’s own ales.

Again like the IPA it came without a label, which in some ways is pretty cool as you don’t quite know what to expect. It poured really dark, almost black with a huge bubbly tan coloured head. 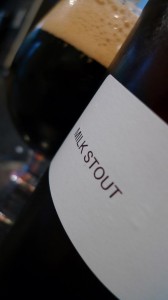 Milk stout? can i put it on my cornflakes?

Having never had a Milk Stout (actually I have but i can’t remember a single thing about it) I wasn’t sure if it would smell or taste of milk, it certainly had some milk notes on the nose these were slightly sour but not in a bad way, these were helped along with roasted coffee, chocolate and a tiny bit of licorice and just a hint of sweetness.

Flavour wise it was very smooth the body was thick and silky without being heavy in the slightest. It’s big on roast flavours, to the point where I was getting a lot of smokiness from it, this mellowed and the chocolate came through, I was starting to wonder where the sourness from the nose was but it didn’t come, instead I got a lovely bitter finish that was incredibly smooth and moreish.

It was a lovely beer and something that worked really well with the cheese plate I was muching on, welsh goats cheese,  some local blue cheese, a few grapes and some charcoal crackers.

Many thanks to Bristol Beer Factory for sending this across as part of my Beer Swap box, you can visit his website here or follow him on twitter here.