Gadds are a brewery I tried a few times during 2009 so when I opened by Beer Swap parcel and found a bottle of the black pearl I was over the moon, especially as it wasn’t one I’d had before and I had really enjoyed Gadds No.3, Dogbolter and Ancestors (reviews coming soon). 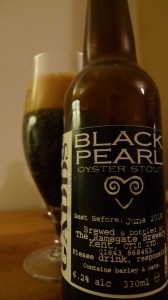 Black Pearl weigh’s in at 6.2% and according to Gadds, Black pearl “Pours with a tight & light tan head and gorgeous near-black body. Roasty aroma, creamy roasty/chocco/mocco fruitless flavour & rich mouthfeel. Bitterness lasts and lasts. Begs for more.. and gets it!”

I’m not going to disagree with any of that, apart from the head which was a lot bigger than I thought it would be, not that I am complaining as it gave it a lovely look in the glass.

The aromas were of coffee, roasted malt and little bits of dark chocolate with just a touch of sweetness.

The beer is packed full of flavour, the most prominent ones being of roast malt and coffee, you then get hints of chocolate and a lovely dry bitter hoppy finish. There wasn’t really any hint of the alcohol that you would possibly expect from a 6.2% beer but this just made it really drinkable, in fact it was drinkable enough to come in a 500ml bottle and still leave you wanting more.

This is a beer I will be buying again soon, provided I can find it, it seems that at the moment no where has any stock, but once again I find my self saying Eddie and Co : I salute you.