Shepherd Neame 1698 was the last of my Beer Swap Beers, I know all of the reviews were supposed to have been finished before Christmas but as I received 7 beers plus the 4 test parcel beers, not to mention my trying not to drink during the week (sometimes failing miserably…a bit like tonight really), resulting in it taking a rather long time for me to type them all up, so apologies to @petebrissenden if he has been waiting for my reviews to finish! 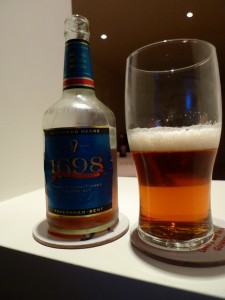 Shepherd Neame is one of those breweries that is synonymous with English (and real) ale and is possibly one of the most well known breweries in Kent, so I wasn’t surprised when I opened my Beer Swap parcel to find one of their beers.

Most people will be familiar with their spitfire beer which is avaible in most good supermarkets, quite a few pubs and is a really good ale, in fact it was one of the first real beers I ever drank.

1698 poured a lovely deep amber colour with a bubbly white head, It smelled of sweet fruits, hints of spices and a touch boozy.

Taste wise I really enjoyed it, It was quite sweet and had a distinct caramel flavour that was complimented by the malt and spices with just the faintest hint of hops, the finish was quite sweet and boozy and lasted a decent length of time, I soon found my self polishing off the rest of the bottle before I realised it was 6.5%.

This is certainly a beer I will buy again and I will be on the look out for Shepherd Neame beers I’ve not tried before, if you want to find out more you can visit their website here