My Beer Swap Part Deux beers arrived a couple of weeks ago now, Andrew over at Bristol Beer Factory was quick off the mark in sending them and they arrived packaged very well along with a little note telling me what the beers were, as they were all bottle conditioned I decided to put them in a cool dark place to allow them to settle and wait for the right moment to start supping them. 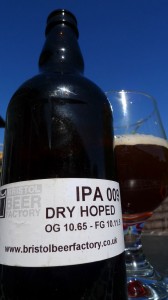 That moment came a couple of days ago when the sun was beating down and the wind was still, I had just finished sorting out the greenhouse, vegetable patch and mowing the lawn so was absolutely gagging for a beer.

I opened the beer cupboard door and there it was, starring me in the face, the dark bottle with simple white test label marked “IPA 009, Dry Hoped (is hoping or hopping? either way I bet both were used.), OG 10.65 – FG 10.115 with a black and white Bristol Beer Factory Logo (which is really cool) a black sheep amongst the brightly coloured commercial labels either side of it. This was to be my first beer of the day.

I grabbed a bag of Walkers Kangaroo crisps and pulled up a chair on the patio, just as I opened the bottle our lass got back from her mornings horse ride, before even looking at the lawn came the cry of “have you just been sat there all morning?”…I ignored it and carried on pouring the beer.

It poured a dark caramel colour, which i thought was quite dark for an IPA, but looking back through some of my beer photos there have been a couple that were a similar colour, It had a little bit of haze from the sediment in the bottle, which didn’t bother me but may cause a few people to raise their eyebrows, the head was lovely creamy and frothy.

The first thing I noticed in the aroma was the hops, they are huge you also get hints of fruit and some lovely biscuit notes on the nose, I couldn’t wait any longer so i dived straight in.

I think it comes in at 6.8% ish and it’s incredibly light for a high ABV beer, the mouth feel is silky smooth, maybe bordering on the thin side but no complains from me, as it swirled around your mouth you get a lovely malty biscuit flavour which is well balanced and nicely hopped (or should that be hoped?) the finish is nutty and biscuit with a lovely smooth bitterness, which is just the right side of bitter. It really did leave me wanting more, I could have quite happily sat in the sun and supped all day but i got dragged out, kicking and screaming to do some shopping.

It was truly a delicious beer, in fact, on Twitter I went as far as saying its one of the best beers I’ve had this year, looking at my notes I stand by this, with a few tweaks it could be up there with the great and a great testimony to why Beer Swap is great, without it I probably would never have got to try this wicked beer.

I’ve had a look around the Bristol Beer Factory website and through the leaflet that was in my Beer Swap box and some of the beers sound very tasty, the branding also looks really good too, especially the logo, so they are well worth checking out if you see them.

Many thanks to Bristol Beer Factory for sending this across as part of my Beer Swap box, you can visit his website here or follow him on twitter here.