Cotswold Wheat Beer was another beer that was sent to me by @realalereviews as part of the  Beer Swap test parcel, (which also included Hook Norton Hooky Gold and Hook Norton Haymaker) and was from a brewery I hadn’t heard of before so I went straight to their website.

According to their site:

Modelled on the famous Weisse Beer made by our German cousins this Frau can be a little fruity. She’s blonde (of course) because, as is traditional with Weisse Beer, she’s unfiltered and her fruity flavour comes from a special mix of malted wheat, barley and hops – a recipe that we keep very close to our chests. Ideally suited to sunny days you’ll find her refreshing, flavoursome and full bodied – listen out for outbreaks of yodelling across the Cotswolds this summer. 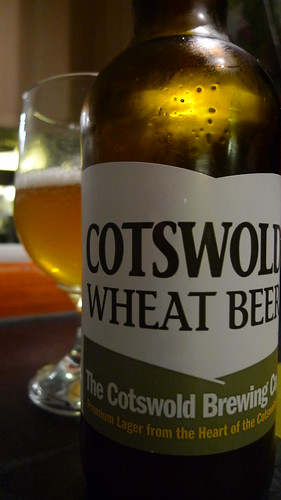 Despite it being a rather chilly -3 outside I thought I would crack open the bottle and see if it could bring back a bit of summer. It opened with a huge hiss, suggesting the beer was going to be quite lively so I gave it a few seconds before pouring it, The aromas were nice and light (and certainly summery) there was wheat, yeast with a little bit of hops and clove and citrus, The beer was a lovely pale yellow and had the usual wheat beer haze.  The head was quite thin but lasted well down the glass.

The beer certainly tasted like a wheat beer but unlike many of them it was very drinkable, light and fruity with a hint of spice…cinnamon and clove and maybe some nutmeg. It is certainly a summery beer and I could imagine being sat on a hillside in the summer, supping this after a hard days walking.

Looking around the Cotswold Brewing website I noticed they seem to specialise in lagers, everything form light lager to a rather strong winter lager, I shall certainly be ordering some of those come summer time because if they are as tasty as the Cotswold Wheat Beer then I will be more than happy.

So yet another thanks goes out to @realalereviews for opening my eyes up to a new brewery.