Posted on April 22, 2010 by andyMogg in Beer Festivals & Events, Beer Swap No Comments

This morning on my way out of the door i bumped into postman pat in his litte red van, he handed me a parcel that I wasn’t expecting, I put it in the footwell of my car and set off to work, quite excited as to what might be in it. 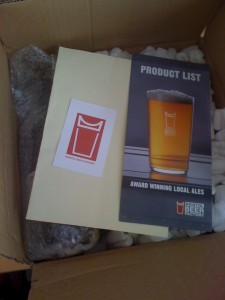 I guess these were from Bristol Beer Factory

On arrival at work the box was hurriedly opened and the contents removed, Result, it was my Beer Swap Beers.

As well as  a hand written note telling me about a couple of the beers there was also a really cool business card and a leaflet with info about Bristol Beer Factory.

The beers were well packed, unlike my recent order from Brewdog which were very lucky to survive the postal service.

I carefully unwrapped the goodies to find 2 Beers from the Bristol Beer Factory, one Dry Hopped IPA and one Milk Stout along with  a rather interesting looking Old Slug Porter and Goats Leap from Cheddar Ales.

Im over the moon with the selection as they are all new beers to me and all sound really really interesting, They will no be placed in the beer cupboard and allowed to settle for a few days, mainly because they are bottle conditioned and I want to drink them at their best, but also because it’s mid week and I am trying to cut back on mid week drinking.

Many thanks to Andrew from Bristol Beer Factory for sending the beers, you can follow him on twitter here or visit his website to find out more about his ales.

Oh I almost forgot here’s the pic of the beers: 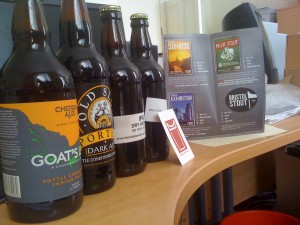 Can't wait to get stuck in