Hook Norton Haymaker was another beer that was sent to me by @realalereviews as part of the  Beer Swap test parcel, It had a lot to live up to as it followed the other Hook Norton beer he sent (Hooky Gold).

The first thing that makes this stand out is the label, I love it, it’s slightly different to the usual Hook Norton ones, it’s the sort of picture I could imagine in a battered old frame on the wall of a lovely country pub. 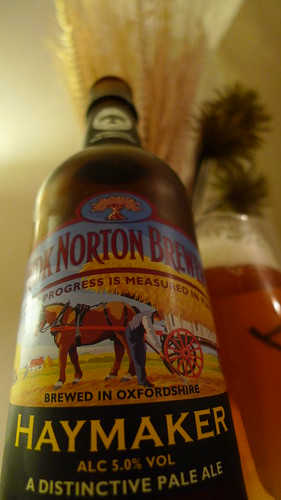 Haymaker poured slightly darker than the Hooky Gold but with the same, good sized, frothy white head. The aroma’s aren’t as summery, I would go so far as to say they are more autumnal, with malt, hops and a hint of spice. I could also smell a bit of hay – maybe I was imagining it because of the name, or maybe Emily had just come in from the farm!!

Taste wise the first thing I noticed was how malty it was compared to the Hooky Gold, It was quite creamy and had a lovely mild bitterness with just a hint of spice coming in at the end, if I am honest I preferred the Hooky Gold as Haymaker was maybe just bordering on a bit malty and not quite as drinkable or interesting as the gold. Still a tasty beer though.