Just like the Raspberry Wheat this one came in a 330ml bottle with the same picture on, which as I said before I really liked, so I was pleased to see it again.

According to the Whitstable website Oyster Stout is best chilled and served with oysters, Unfortunately I don’t like oysters, so I gave them a miss, I did however chill the beer. 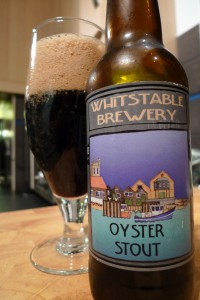 It poured really dark with quite a lot of fizz which took me a little by surprise, I wasn’t expecting quite such a big head when I poured it, the beer it’s self was very dark with a pale caramel head, It smelled of roasted malt and nuts with a very subtle hint of chocolate.

Taste wise it was lovely, quite thin bodied but with a lovely roasted malty flavour, there were definite notes of licorice and coffee making it very very tasty indeed.

This is a really lovely stout, well balanced, not to heavy and packed full of flavour so a big thanks to Pete for sending it to me, I hope to find a few more of their beers to try very soon.