Glyn over at the Rake was taking the mickey out of the T-shirt that I wore for GBBF, not only was it bright green but it had the slogan “My idea of a balanced diet….a beer in each hand”. I thought it was quite funny and would make me easy to spot at GBBF.

Like it or not but beer related t-shirts have been around for years and seem to be making a bit of a come back, not just the standard brewery t-shirts but all sorts of nicely designed or cleverley worded t-shirs are starting to appear.

Last week I came across this one that has a built in bottle opener, not sure I would want people trying to open bottles on my chest but it’s quite a novel idea non the less.

Two of my current favourites are available from Ales by Mail and Drink beer and carry on. They both come with modifications of war time slogans on,

As far as brewery branded t-shirts go I’m not usually a big fan as vey little design has gone into them and usually involves  a black t-shirt and huge logo (Note: Thanks to Brodies Beers for sponsoring me £100 for the Coast 2 Coast if I wore one of their hats – it was for a great cause) 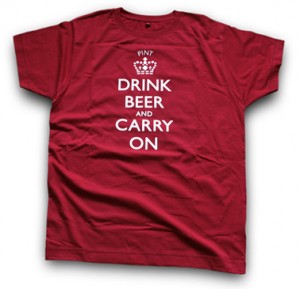 Drink beer and carry on

Having said that I love what Justin at Moor has done with shirts and t-shirts, their logo suits it really well and it comes in nice bright colours like green, red and purple, and some of the stuff Brewdog looks pretty cool too.

I will also admit to having a Hobgoblin one with the slogan that says “What’s the matter lager boy….afraid you might taste something” although this has never been worn outside the confines of my house and probably never will.

Do you own any beer related t-shirts?? do you wear them? Have you seen any clever t-shirts?? Leave your comments below.