Posted on February 23, 2011 by andyMogg in Beer Reviews, BrewDog 8 Comments

There’s been a lot of talk about Brewdog’s Punk IPA lately, first of all they released a version called Punk X, I think it was an experiment to see what people thought of Punk IPA with a few tweeks, It was released in cask and bottle (possibly keg too) and not being able to get to anywhere that had a cask I bought a case of bottles as I was interested to see how one of the first beers from Brewdog had evolved. 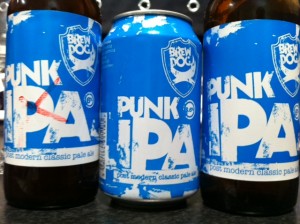 From what I’ve seen and read there have been a few consistency issues with Punk IPA over the last few months, so hopefully new Punk will address these and Punk IPA will once again be a staple in my beer fridge.

Not long after the release of Punk X, Brewdog announced they were releasing Punk IPA in cans and that they were to contain the new and improved Punk IPA, I was quite excited about this as I’ve been after finding more options for wild camping beers for a while, and in this case James was kind enough to send me some  so I decided to do what everyone else was doing and compare the cans to the bottles of Punk X, I also decided to through a bottle of original Punk IPA into the mix and to taste them blind for good measure, a bit like I did here.

As I wouldn’t be opening and pouring the beers I wouldn’t know which was which although I was pretty sure I’d know once I had seen and tasted the beer, so I gave the new packaging the once over before sticking them in the fridge.  I have to say the new can looks brilliant, the Punk branding really translates well onto a can and makes it stand out the only issue I can forsee is that they do look a bit like can’s of pop, which will no doubt raise a few eyebrows. 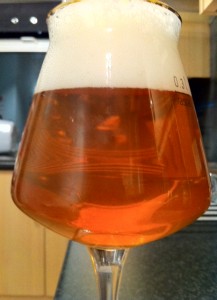 So onto the tasting, I got my self comfy in my favourite chair just as the first glass was brought in.

It was a really clear almost amber colour, a lot darker than I remembered Punk being, it smelled really fresh, the floral notes were huge and there was a big hanfull of freshly cut grass throwin in for good measure. It tasted almost exactly the same, It was well balanced, the malty backbone was great and there were enough hops in there to give you a good kick, the finish was quite bitter but not overpowering or sharp in the way that I recalled..

I soon polished off the glass, had a quick half pint of water and then started on glass number two. The first thing that was clear was the colour, it was a completely different colour, a lot paler and not as ambery. Punk number two didn’t have such strong aroma, there were hops there and a little bit of grass but they were no where near as powerful as the first glass. It felt thinner in the mouth and and the malt from the first beer wasn’t there, It was also a hell of a lot more bitter than the first, It took me a bit longer to finish this one due to the huge bitterness but the glass was soon empty, washed and ready for the third and final beer.

Punk number three was the same colour as beer number one all be it a lot more hazy. The aroma’s were there but not quite as lively and didn’t jump about as much as Punk one, There was an almost sweet smell to it too which definately came from the malt and this was present 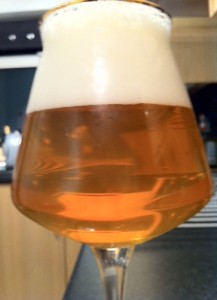 in the mouth, It tasted pretty much the same as Punk one but slightly more toned down and not quite as zingy.

While finishing Punk number 3 off I drew my conclusions on the front of the TV guide, pretty much straight across some blokes huge forehead, I’ve no idea who he was but I’m sure he’d not mind his photo being recycled.

I wrote that I thought Punk number one was the Can, mainly beacause it tasted so fresh, which was likely because it was the newest of the three beers, it was also the same colour as Punk number three but clearer, suggesting it was a filtered finished product more that beer number three was.  Punk number two was definately original Punk, mainly because of the bitterness, I’d also suggest that it wasn’t at its best, I really wish that  had noted the batch number.

To be honest canned Punk was the beer of the three, 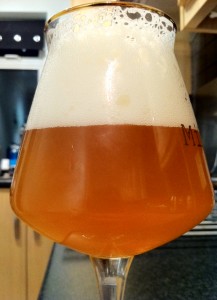 I loved the freshness and I loved the balance of hops and malt. It’s definatley down to the new recipe, if Brewdog can keep it consistent and it keeps well in the can then it’s back up there where it belongs.

As for the actual can I looks cool and feels more solid than some of the cans I’ve had from the USA lately, It will certianly be finding it’s way into my rucksack next to my tent for my next camping trip in the mountains.

If you wan’t to try it you can buy it from the Brewdog site here and I hear it might be in shops very soon too.