I’ve wanted to do blind tasting between Brewdog‘s Infamous Punk IPA and Thornbridge’s Stunning Jaipur for a while, but haven’t actually managed to keep a bottle of either in my beer cupboard long enough to compare them side by side. So with the arrival of my latest 52 week beer club I finally had both beers in my possession at the same time. 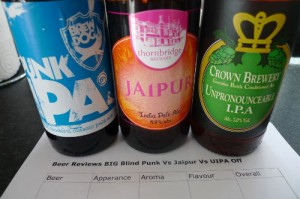 I also had a couple of other IPA’s kicking around in the cupboard but in order to keep things simple I decided just to add just one more to this battle royale, this came in the form of Crown Brewery‘s excellent and often underrated Unpronounceable IPA.

I nagged Emily into trying to pour each beer the same, washing and drying the glass (My new favourite Duvel Glass) between beers and to make sure I didn’t know what was in each glass,  so that I was completely in the dark and couldn’t make judgements based on what I thought of the brands or brewers.

Beer number one arrived, it was light golden with a thin, pale white head, the lack of aroma took me by surprise, I was expecting something bigger and bolder on the nose, there were hints of citrus, hops and a little spice, but they were all really faint and it took me a while to pick them out.

The body was light and smooth, flavour wise it was quite and peachy there were hints of tropical fruit, nothing huge, as the beer warmed the malt came through as did a little caramel. The finish was hoppy and bitter, the bitterness lasted ages. I plumped for this one being Brewdog‘s Punk IPA.

Once finished, Emily kindly washed the glass out and poured mystery beer number 2.

The first thing I noticed about this beer was that it’ head was a lot bigger and frothy. It was a similar colour to beer number 1 but maybe a touch darker.

The aromas were of a fair bit stronger than beer number 1, citrusy hops, some pine and really strangely some caramel popcorn.

Flavour wise the hops come first, citrusy, bold and grassy then the caramel malt comes in, this again becomes more prominent as the beer warms up and where I think the caramel popcorn in the aromas came from. The finish is a lot less bitter than beer number one, smoother and more refined, this makes it mega drinkable. I put this down as Jaipur. 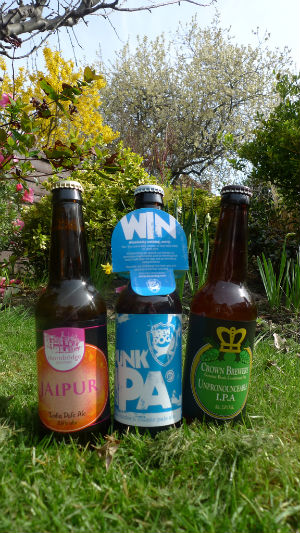 Emily then cleaned and dried the glass again and poured beer number 3.

It was a bit cloudier and a darker amber than the previous two beers, the head was huge and a really tight foam. The aromas were boozy, fruity and a little bit yeasty.

Flavour wise there was grapefruit, hops a hint of sweetness and touches of malt, the finish was hoppy and bitter, the bitterness was somewhere between beer 1 and 2, not quite as bitter as the first but slightly more bitter than the 3rd, process of elimination and familiarity had this one nailed as Unpronounceable IPA.

So out of the three and without knowing which was really which, I marked number 2 down as my favourite followed by number 3 and then number 1, I loved just how drinkable beer number 2 was and how really well balanced it was, it was a beer I could drink all night every night.

Emily then revealed which beer was which, I’ve put them below with a bit of information about each and where to get them so if you want to give the blind tasting a go you can get your hands on some beer.