My Antonia was something I had started to hear whispers about on twitter and from other beer bloggers so when My Brewery Tap offered to send me a bottle I snapped Rich’s hand off. I also drank it pretty much straight away but with one thing and another it’s taken me ages to get round to posting this. 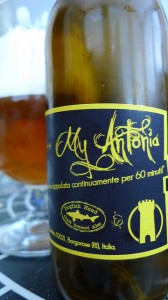 My Antonia was first brewed as a collaboration between  Birra Del Borgo and Dogfish Head in Italy, 2008 and this year was brewed by Dogfish Head at their brewery in Delaware. I’m not sure if the beer has changed between the two places as I wasn’t fortunate enough to try the first batch, I did however notice the label has gone to a more funky black and yellow affair from a rather more traditional country style label which can be seen here.

My Antonia is a new beer style to me it’s a continually-hopped imperial pilsner, While I’ve had other continually-hopped beers before I’ve never had and imperial pilsner. My Anonia poured a hazy golden yellow with a thin white head, the aromas are sweet, caramely and floral, which is just about how it tastes, there’s a nice earthy herbal quality in there followed by bitter sweet caramel and hops. It hides the ABV quite well with only a tiny bit of the alcohol coming through at the end.

For me it’s like someone has added a bit more malt and hops to a pilsner and like I said earlier it’s a new style to me more importantly it’s a style I like.

Unfortunately it’s a seasonal brew and Im not sure if anywhere has any left (EDIT My Brewery tap still have some left here), if you do find it in a bottle or on draught then be sure to give it a go. If you can’t find it then give the other Birra Del Borgo and Dogfish Head beers a go and they will give you an tiny insight into just how good this beer is.