Lakeland Blonde was one of the beers I was very kindly sent by Bitter End Brewing Co and My Brewery Tap, it was the second of their beers I tried after the Lakeland IPA which I thought was rather tasty.

Lakeland Blonde weighs in a little bit lighter than the Lakeland IPA at 4.2%, It is brewed with Saaz and Cascade Hops, Cumbrian Water 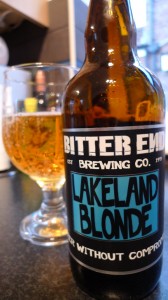 and most surprisingly Lager Malt.

It pours crystal clear, really pale golden with a small white head. The aromas weren’t huge but there was a hint of citrus a few hops and slight grassy notes that were mentioned in the tasting notes.

Flavour wise it wasn’t quite as full as the Lakeland IPA and the body was a little bit thinner, there were very subtle hints of the citrus and you could definitely taste the Cascade hops in the beer which gave it a lovely bitter finish that cleaned the palate and left me feeling rather refreshed.

Personally I preferred the the Lakeland IPA but Lakeland Blonde would be the perfect post hike pint on a hot summers day in the Lake District, It would also be a great introduction to craft beers for all your lager drinking mates, as it has enough flavour to make them think about it but it’s not got anything that will scare them back onto lager.

Since trying some of Bitter End’s beers I have seen them in Open All Hours in Keswick, which Is kind of nice as it must mean they are doing something right as Open All Hours stock some fab beer and as I said in my previous post the branding is great and really helps it stand out.

I’ve still got a few more of their beers to write up so in the meantime check out The Bitter End website, read their blog or follow them on twitter here.

The beers are also available to buy from My Brewery Tap