Bitter End Brewing Co weren’t a brewery I had heard of until I got a bottle in my My Brewery Tap case and then was very kindly sent some of their other beers to sample. I was quite surprised that I’d not heard of them as we spend a lot of time in the Lake District, camping, walking and visiting various drinking establishments, not to mention regular trips to Booth’s and Open All Hours in Keswick for various bottles of local ales. 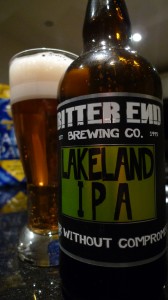 The branding on the Bitter End Beers is great, simple clean and a little bit quirky, the labels also have a nice shine to them so I imagine they would stand out pretty well on the shelf.

The Lakeland IPA weighs in at 5.5% and is brewed with First Gold, Simcoe and Cascade hops,  so that sounded right up my street as Cascade and Simcoe are two of my favourite hops.

It pours a lovely pale copper colour, the aromas are hoppy, citrusy and a little malty, there’s also a slight floury soapy note that is lovely and summery.

Taste wise it’s great, it’s light yet has plenty of flavour, there is a slight caramel sweetness from the malt followed by the nice hop characters from the nose and then into a slight hop bitterness that cleans your palette and leaves you wanting more.

It definitely falls into the I want to drink more of this category (see here) It’s somewhere between a Saltaire Cascade and a Thornbridge Jaipur – not quite as punchy as the Jaipur but a bit more flavour than the Cascade, both of which are beers I love.

I’ve already got stuck into the other beers in the case, reviews for which will all follow soon. In the meantime check out The Bitter End website, read their blog or follow them on twitter here.

The beers are also available to buy from My Brewery Tap