Last Friday night a group of us went to the Black Sheep Beer and Food Night at the brewery in Masham, 3 of us were beer bloggers the other 3 were our partners, some of who enjoy the odd beer and some who don’t drink beer at all. 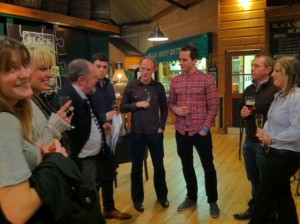 Listening to Alan the brewer

We arrived in Masham a little early, checked into the wonderful Kings Head Hotel, our room was lovely, exposed beams (the one in the bathroom was quite low as my head found out at 2AM) and very nicely decorated, then headed for the bar, which had a decent selection of cask ale including the local brews long with Adnams bitter, Sharp’s Doom Bar and Brains Milkwood, The ticker in me went for the Milkwood as I’d not had it before, it was in gread condition, lovely creamy head, slight caramel notes and a little bit of hop bitterness at the end.

We then headed over to one of the other pubs in Masham, it was a little busy and only had on beer on so we went  across to the Bruce Arms, since I was last in it’s half been converted to a curry house, which while it smelled delicious wasn’t really what I had in mind.  They had a couple of beers on so we stayed in there until heading for the brewery.

On arrival at the brewery we were very warmly greeted by Ashleigh and given  a glass of Kasteel Cru, which to be honest ins’t my cup of tea but tasted way better than last time I had it, it seemed drier and less 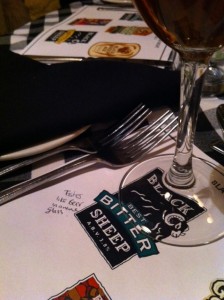 sweet, I’d rather drink it than champagne that’s for sure. Emily soon necked hers too.

After a quick chat to Alan, the head brewer (read his meet the brewer here) we headed for our seats, unfortunately we hadn’t been quick enough and couldn’t all sit together, so had to split into two groups.

toast and toasties, bringing back all sorts of childhood memories. It paired well with the beer which was peppery and bitter with a touch of sweetness although I’d have happily drink almost any beer with Rarebit/cheese on toast.

Next up were Tempura Prawns with Golden Sheep Ale, The prawns were brilliant, the batter was crispy and full of flavour, the prawns were huge and really juicy, the squeeze of lime over the top added an extra dimension which for me livened up the Golden Sheep, the zingy lime and sweet and juicy prawn worked with the beer like a wedge of lime works in Mexican lager,  On it’s own the Golden Sheep was my least favourite beer of the night, it just didn’t taste of a whole lot, maybe if it had been served before the Best Bitter it would have been a different story. 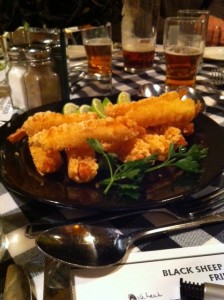 The rather wicked prawns

Main Course was Lamb Shank, braised in Black Sheep Ale and served with vegetables and a Rosemary sauce oh and paired with Black Sheep Ale, the Lamb Shank was huge, juicy and tender, the veg were crisp and tender and the whole lot went perfectly with the ale, especially the rosemary, the ale it’s self was fruity and dry and bitter with a slightly sweet and toffee finish.

Pudding (or dessert if your posh) was chocolate tart served with Ruddy Ram, which I think is pretty much the same beer as the Wooly Jumper I had in the Maltings in York not so long back, It was roasty and toasty with quite a bit of liquorice and coffee in there, there was also a nice underlying bitterness that went really well with the bitter sweet dark chocolate tart and the rich chocolate pastry.

Final course was a trio of Wensleydale cheese (normal, smoked and blue), crackers (or biscuits), with the strongest beer of the night, Riggwelter, It had been ages since I’d had Riggwelter on cask and the last bottle I had was used to make a rather tasty beef stew. Riggwelter tastes a like fruit cake made with coffee (or a bit like this cake here) It’s got the unmistakable Black Sheep flavours and is like an amped up, boozier version of the Ruddy Ram, the liquorice is there but not quite as prominent as in the Ruddy Ram. This was my beer of the night, although it went well with the cheese It would have also been great with the chocolate tart. 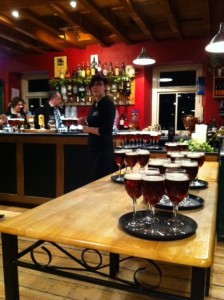 Beers lined up for tasting

Em got right into things by making her own tasting notes on the sheet provided, or so I thought until I had read them, they ranged from Tastes like beer in a wine glass and tastes less like beer in a wine glass to tastes like dark beer with chocolate and not as bad as I remember but nice with cheese. Surprisingly the Golden Sheep was her least favourite too, especially when with the votes for the whole room, the beer of the night was Golden Sheep and while I think that was the best match with the food it was my least favourite beer, it was just a little bit plain and didn’t float my boat. I’ll also admit that once the beers warmed up too much the flavours changed and I wasn’t so keen, but when at the right temperature they were great.

Overall I think the night was a great success, the setting is great, the beers and foods were straight forward matches but worked really well, Each beer being served in a wine glasses was an interesting touch, the first one was raised to Zak who is known for his love of an oversized wine glass and who we are all hoping gets sorted after the recent news about Beer
Ritz. There is definitely room for improvement, I’d like to see the seating a bit more organised, tables of 5 is a bit of an odd number and unfortunately as we ended up across a couple of tables, the table I should have been on scoffed some of our food, even after we asked them about it. I think Alan may have lost the crowd a couple of times but I think that was due 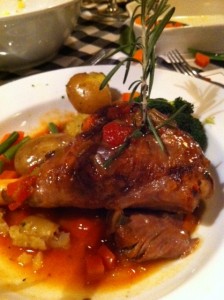 to some of the attendees being more interested in their own conversations. Finally a little Q+A session with the brewers or a pre meal tour might be a nice idea but I guess with the size of the evening that could prove difficult.

The tickets are £20 each and that’s a bargain, especially going on the size of the lamb shank alone. I know Black Sheep take a bit of kicking for not being exciting enough or brewing mega hopped high ABV beers but truth be told, they make good solid beers which are all definitely from the Black Sheep family and when in good condition I’ll happily drink. It’s just a shame the new Imperial Stout wasn’t ready to make an appearance yet as I’ve got high hopes for that one.

I hear Black Sheep are planning on doing another one later in the year, keep an eye on their website and twitter for details and book up as soon as you can, if you are planning to stay in Masham I’d certainly recommend the Kings Head for bed and breakfast and if you want to do a bit of walking then there will be some suggestions on my other blog before long.

One comment on “Black Sheep Beer and Food Night”