Posted on December 4, 2010 by andyMogg in Beer Reviews, BrewDog, Open It 4 Comments

This was probably Brewdog beer I was looking forward to the release of with most anticipation, those that know me or follow me on twitter will know that I’m just as obsessed with great coffee (usually from the excellent Hasbean) and everything chilli related (see my other blog) So given that AB:04 contained Hasbean coffee, Chilli in the form of the almighty Naga, one of the hottest in the world and a good splattering of cacao, to say I was excited was an understatement. 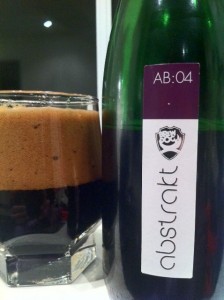 I’d been holding onto it since October and with the snow blasting down outside I felt there was no better tie to Open It.

It poured jet black, really thick and oily with a huge deep dark brown head, it looked like a glass of dark chocolate with a frothy milk chocolate head. As the beer swirled around the glass it left obvious legs on the glass, just like a good wine, not surprising when it weighs in at 15% ABV, making it stronger than a lot of wine in the supermarket.

It smells amazing, deep, rich dark roasted malt, loads of  roast coffee and chocolate, there’s a little bit of booze on the nose too but it doesn’t take anything away from the rest of the nose.

The first thing I noticed when I took a sip was just how smooth and how full bodied AB:04 was, it was incredibly rich, the coffee really stands out at first, dry, roasted, fruity and that lovely balanced bitterness that great coffee has, then the chocolate slides in, silky and bitter like real dark chocolate, just when you think it’s over the Naga chilli makes an appearance giving it a green raw chilli tang followed by a pretty decent afterburn, not blow your head off but by the time I’d finished the bottle I knew I’d been drinking beer with chilli in. The flavours hung around in my mouth for ages, most of all the coffee, it was really predominant but it a good way.

It could possibly do with a bit longer in the bottle just to mature a little bit and give it that extra edge, luckily I’ve got one more bottle left in the beer cupboard.

This is possibly one of the most complex and brilliantly put together beers I’ve ever had, the flavours really do blend amazingly well, big hats off to the guys up at Brewdog.

Let’s just hope tomorrow and Sunday’s Open It beers can live up to this stunner.