Posted on May 8, 2011 by andyMogg in Beer Reviews, BrewDog, Open It 3 Comments

When Brewdog and Stone released Bashah way back in 2009 I was a big fan It was a genuinely interesting beer, so when they announced they were releasing two reserve versions which had fruit added I knew I had to have them. 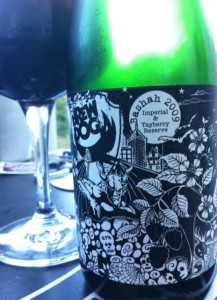 I drank the Black raspberry one a while back and loved it, I very nearly drank the Tayberry one straight after but then I remembered how much they cost so stuck it in the beer cupboard waiting for a special occasion.

This occasion came in the shape of Open It round two.

I’m still in love with the label too, it’s definitely up there with the sexiest beer labels ever It really does add to the occasion along with the champagne style bottle and caged cork. Although the cork isn’t the easiest in the world to remove, I had to resort to using my teeth.

It poured with less head than the Black Raspberry version but looked pretty much the same otherwise. It smelled tart and peppery with lots of fruit, like raspberry but not, there was also a good whiff of boozy whisky and a little bit of vanilla.

Flavour wise I didn’t get as much fruit coming through as the other bottle but there was the lovely spicy pepper from the aroma and the fruit that was there was nice and tart, There was a huge whisky kick and loads of smoke in there too which made for a really delicious beer.

Other than that my notes don’t really say much, I as just sat enjoying the moment.

Although I have to say I definitely liked the Highland and Black Raspberry version better.

I also opened a Rogue Brutal IPA the same day which as nice as it was wasn’t in the same league as the Bashah Reserve.