I’ve had this review sitting round here for a good while now but never gotten round to posting it, mainly because I’ve had other stuff to say but also because Dogma was no longer available from Brewdog…..well until now.

News broke a couple of days ago that Dogma was back in the Brewdog store (you can buy it here) so I thought it was about time I published this. 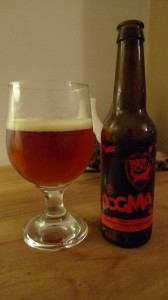 Dogma has had a bit of a rocky road, It was originally called Speedball when it was first released but the powers that be weren’t happy with the references to a certain cocktail of drugs so the decision was made the name had to go. Newly branded as Dogma, the heather honey ale hit the shelves and I bought a load of it (I’ve still got 1 final bottle stashed away for a special day), which surprised a few as the first time I tried it I couldn’t quite get my head around it and wasn’t sure if I liked it, but as the glass emptied, it grew and grew on me.

Reading the label it’s got loads of different ingredients in including Poppy, Guarana, kola nut and heather honey, although with the exception of honey I have no idea what the others are supposed to tastle like.

It’s one of those beers that has loads going on from the moment you open the bottle.  It pours an amazing deep glowing amber colour with a good off white head, The first thing on the nose is the honey, sweet, sticky and flowery, with  a hint of malt and a little bit of lemon from the hops.

In the mouth it’s got so much going on, there’s honey and heather up front, with a good whack of pepper and bitterness combined with a malted milk biscuitiness, It finishes  quite softly with the honey but then it’s surprisingly dry right at the end which I guess comes from the hops.

The closest thing I can think of to Dogma is that it’s a bit like William Bros Fraoch on steroids.

I’m sorely tempted to buy some of the new batch to see how it compares to the bottle in my cupboard, I’d suggest if you’ve not had it to sick a couple of bottles in your next beer order, you won’t be disappointed.

You can buy it from the Brewdog website here.