Brewdog have got their Edge back.

When Brewdog first arrived on the scene I remember ordering their beers online and being blow away by how different they were, their branding was spot on and the beers tasted fab, Even the early tasting case I bought that had prototype bottles of what were to become Chaos Theory and Zeitgeist showed just how much potential these guys had. Thinks then started to get a little silly with various publicity stunts that I started to fall out of love with them. 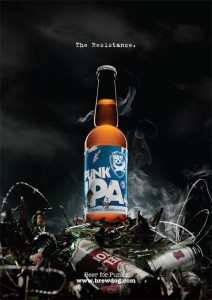 Brewdog haven’t been without their critics, yes, at times, I’ve been one of them but over the last few months, they seem to have got back to concentrating on brewing and selling great beer.

The Abstrakt Series has been great so far, interesting beers, well packaged, while  slightly price they are different and interesting enough to make me want to buy and drink them, they also get people talking for the right reasons. I’m lucky enough to have a bottle of each stashed away for a special occasion and to have tried each one when they arrived, My pick of the bunch so far has to be AB:03, while I thought it smelled pretty terrible it tasted fantastic, Big and boozy, stacked full of strawberries and raspberries with a hint of whisky sweetness and then a lovely bitter, tart finish. Having said that I’ve not tried the latest one AB:04 yet, which has coffee, chocolate and the all important chilli in it.

They re released Chaos Theory, which as I’ve mentioned before is one of my favourite Brewdog Beers. It’s hoppy, light and utterly drinkable, I found it really hard not to drink the bottles I bought all in one go. I hope it goes back to being a regular on the Brewdog brewing roster.

Next 5AM Saint appeared in my local Morrisons, alongside Punk and Trashy Blonde, competitively priced and readily available, great stuff. I’ve also heard that Tesco are stocking Hardcore IPA as their Finest American IPA, I’ve yet to find any but at £4 for 3 bottles it’s a steal and no matter what you think about it being re badged or re branded, the important thing is it’s in the supermarket….I just wish my local  Tesco could be persuaded to stock it. 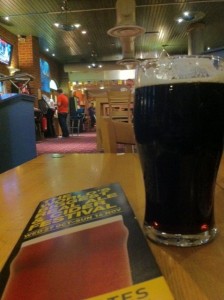 Brewdog in Spoons, what ever next?

Then to top it all off my local Wetherspoons had Brewdog Edge on cask for the opening night of it’s autumn beer festival, To be honest, I wasn’t expecting much, the tasting notes said it was a 3.2% mild. To be completely honest it blew me away, It was a lovely dark chestnut colour, almost black, with a thin off white head, the aromas weren’t huge but there were hints of hops and malt.

The taste was out of this world, for such a low ABV it was packed with sumptuous roasted malt, hints of smoke and then a lovely lingering bitter hop note throughout, that just made it ridiculously drinkable. My only criticism would be it was slightly thin and maybe a little too cold, but they are only slight concerns.

For me Edge is Brewdog back to their brewing best, taking a traditional style of beer and adding their twist to it, I really could see Edge flying off the shelves if it was put in some nice 500ml cans.

They’ve also opened up a new bar in Aberdeen, reports have been good and I’m now desperately trying to find a reason to be passing by so I can call in for a few beers.

Of course the last few months haven’t been without a little bit of Brewdog controversy, there’s been all sorts said about cask beers, the measures available in pubs, feeding IPA to lambs and the Tesco IIPA thing, but as I wrote this post I didn’t care, I was back in love and admiration (and maybe a bottle of Punk and AB:03) for what Brewdog have done over the last few months*. Long may It continue.

*With the exception of those few little stunts I mentioned earlier, don’t worry I’m some way off becoming one of those people who think they can do no wrong.

3 comments on “Brewdog have got their Edge back.”