It’s been announced (a little bit early by all accounts) that the guys over at Brewdog have done it again, Created the world’s strongest beer and grabbed the headlines by calling it “Sink the Bismark” a reference to toppling the German beer that knocked Tactical Nuclear Penguin off the top spot. 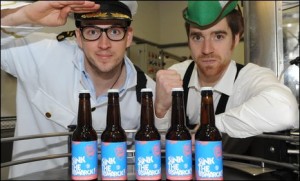 Now yet again i find my self wondering why?

Why does it matter who has the strongest beer in the world? why call it something with so many possibly historical and racial connotations? Publicity that’s why! Yes I know I am fuelling it by writing this blog post but I really do wish Martin, James and Co would get back to brewing really good drinkable beers.

I for one would love to see Chaos theory make a return,  I also love the sound of their abstrakt beers – beers that genuinely sound interesting and beers that I really want to drink. I don’t care who brews the strongest beer, it’s almost become a “who has the biggest dick” competition and in my opinion it’s not what the brewing world needs.

Yes it could just be seen as a bit of fun but again, it all seems a bit childish and petty,  what the beer world needs is for people to talk about the beer not about the marketing!

Would I like to try it? … Yes I probably would, which beer geek woudln’t? Will I be buying it? probably not…£40 for one bottle is just too much.

You can read more about “Sink the Bismark” here (which is where i got the image from) and no doubt on various other blogs later today. As of yet there isn’t much info kicking around, just that its over 40% and it’s set to become the world’s strongest IPA

11 comments on “Brewdog – Sink the Bismarck”