I can hear you all thinking, “A lager? on Beer Reviews??” It’s not the first time – I reviewed Brewdog’s 77 Lager a while back, and when this one was sent to me I thought it would be rude not go give it a go.

With Brooklyn Lager, the word “Lager” is a bit misleading as it’s not what most people would class as lager and I think it’s got more in common with something like Flying Dog Doggie Style. 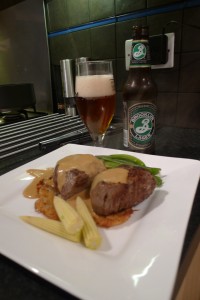 Brooklyn Lager…or should it be beer?

For a start it comes from a Brooklyn Brewery, it pours a lovely golden amber colour with a big frothy head and has a wickedly hoppy aroma, it’s quite floral which comes from the cascade hops that they have used (which just happen to be one of my favourite hops).

Taste wise Brooklyn Lager is great, its light and bubbly but silky smooth, the floral hops really come through along with some citrus and a malty sweetness and then finished off with a dry bitterness from the hops which lasts a good while and makes the beer very moorish.

I drank the beer with a rather tasty steak served with a spicy sauce and potato rosti, the beer really held it’s own against the strong flavours and really complimented both the spice and the beef.

Since I first wrote this review I also found Brooklyn Lager in the Giraffe restaurant in Manchester Airport’s Terminal one, and in my opinion it was the best beer available in the whole of the terminal, their burgers were pretty tasty too and they had stacks of chilli sauces.

Brooklyn Lager is available from BeerMerchants and retails at £2.10, which for an ale that has to come all the way from the USA is a really really good price and I will certainly be buying a case or two of this come the summer time.

You can find more about Brooklyn Brewery on their website here