Bruges – A quick run down

Over the last few weeks I’ve lost count of the number of times I’ve been asked which pubs and bars we visited while we visited Bruges just before Christmas so to save me having to email/text/Facebook it every time I thought I’d put a quick run down on here, It’s by no means the definitive guide to Bruges, it doesn’t even come close and I know I’ve missed off some of the places we visited, but the biggest bit of advice I would give anyone going to Bruges is to get a map and explore, there are hundreds of bars and beery places nestled down side streets, up alley ways and hidden towards the outskirts of the city, while they might not look exciting from the outside once you are in and you see the beer lists then all is well with the world.

We flew from Newcastle to Brussels then got the train from the airport to Bruges which took about an hour and a half and involved one change, The trains were quite posh and very clean, they staff at the airport station were really helpful and printed us out a list of stops so we could work out where we were. Next time I’d possibly book the train in advance just to save a few quid. 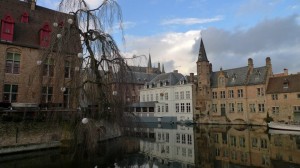 The beer wall is under the tree on the left

Firstly we stayed in a lovely little B&B that was recommended to us by @fletchthemonkey, it was in a really handy location, just outside of the town so it was nice and quiet, it was comfy and clean, the breakfasts were excellent (served either in your room or with the owner in his dining room) and the mini bar was superb, containing well priced beers from local micros and bigger breweries, they even had Westvleteren 12 in the cellar for a couple of euros a bottle. They even gave us a little card that meant we could get discount off entry to various places in the city.

On the subject of price, it varies massively, in one pub you might find Cantillon Fou Foune for 15 Euros in another it will be 30, that said most places seem to be quite consistent for things like Bruges Zot, Duvel, La Chouffe and other draft beers.

The first pub we we ended up in was called Het Hof Van Rembrandt (I think) it seemed like a bit of a chain but it had some cracking beers on and was modern and clean inside and the beers didn’t seem to badly priced, especially as I’d chosen to start with a N’ice La Chouffe, It was here our exploration began, visiting various sights interspersed with a bar or two, so without further ado here’s a few of the places we visted and enjoyed. 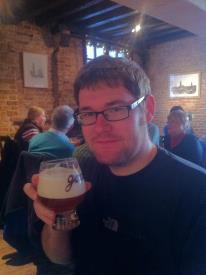 Cambrinus – probably the busiest bar in Bruges, it’s worth booking if you want to get in on a Friday/Saturday night especially if you want to eat, the beer list was like an encylopedia, we hit it lucky and managed to get the last table in the place so decided we’d make the most of it and eat, we opted for the brewers menu which was 3 courses each containing beer, starting off with a cheese and beer croquette, followed by beef in beer with fries then a beery crème brulee, each course was a good size and extremely tasty, the beers we had were delicious, both the house beers were spot on and the bottles we tried were in great condition, we did go back a second time just for drinks where amongst others we tried beer from a glass horn, worth it just for the photos.

Brugs Beertje – I’ve wanted to go here ever since seeing it on the Hairy Bikers program and we weren’t disappointed, the beer list was brilliant with a wide selection of styles and varying prices, we shared a few bottles of Lambic and Geueze before treating our selves to a big bottle of Rodenbach Caractère Rouge which was simply stunning, we also had a good chat to the lady I recognised off the TV,  It does get busy on a night so go early or you might not get in.

Cafe de Kelk – We came across Cafe de Kelk by accident when taking a bit of a breather after eating, it was quite dark inside and wasn’t very busy but had a nice atmosphere and a good range of Lambic beers along with lots from Struise brewery, although I didn’t try any of them as was in the mood for sour stuff.

Vlissinghe – Didn’t have the best range of beers but is apparently the oldest pub in Bruges, it certainly felt like stepping back in time while we were in there.

Cafe Rose Red – instantly recognisable by the hundreds of red roses hanging from the ceiling, polite staff, nice cheese and plenty of different beers to suit just about everyone, I worked my way through the large mirror of Geueze while the Mrs drank Kriek.

Struise Shop – OK technically not a pub but a great little beer shop which you can have a glass or two of key kegged beer while browsing. 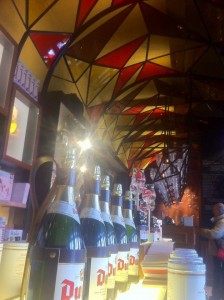 ‘t Terrastje – This was just round the corner from the B&B had some lovely Christmas beers on as well as a small but perfectly formed bottle range, the Orval seemed cheap too. We didn’t have food but it looked and smelled very tasty indeed. It’s also ran buy a British guy and his wife, the sign outside the door explaining opening times is funny.

Duvelorium – This is inside the Historium museum in the main square, It’s worth going just for the stained glass ceiling. The beer range was decent and the Duvel salt poporn was amazing. Don’t worry you don’t have to pay to get into the bar it’s just up the stairs as you enter the museum, before the ticket desk.

The Beer wall / 2be – A huge wall of beer that ends with a bar and beer garden over looking the river, lots of bottled beer and a good range of beer on tap, the beer shop is down stairs and has a massive selection of bottles from all around Belgium along with a few from further afield.

We did visit other bars which we enjoyed but we did’t get photos of them or take their names down, there was one particular one which was full of white plastic “designer” chairs that had a fantastic range of Phantome beers.

Every pub we went in the staff were extremely friendly and we enjoyed a chat with most of them, some were surprised at the beer styles we’d ordered, saying they didn’t get many English people ordering them, it would seem most tourists simply ask for the biggest and strongest beers they have. If we couldn’t decide what to have or wanted advice they were only too happy to help.

Most pubs offer some kind of snack involving meat, cheese or bread…even better all three, most also give you a little bowl of nibbles with your beer to help soak up the booze. 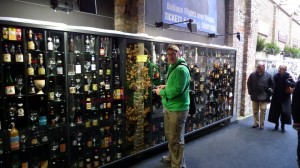 a bit of the beer wall

While we were there we also booked a meal in Den Dyver which wasn’t cheap but was absolutely outstanding, we had a glass of the house beer then both opted for the beer menu to accompany our food, the portions were big, perfectly cooked and had lots of exciting flavours which went well with the beer provided, the staff also seemed knowledgeable and the decor was lovely.

Another excellent meal we had was in Sint Joris where I had pork cooked in Kriek which I could have sat and eaten all day long.

As you’d imagine there are hundreds of beer and chocolate shops, I can’t remember the names of the beer shops but there’s hardly a street without one, There were however two chocolate shops that stood out, the first was the Chocolate Line who made lots of crazy flavours including tabacco, wasabi, fried onion or bacon, It’s not cheap but it’s worth trying. The other was DuMon who’s pralines were absolutely delicious. The hot chocolate in De Proverie was delicious.

We used the voucher our B&B gave us to buy a museum pass as it wasn’t much more expensive than just going up the tower and allowed you entry into a lot of the other museums and galleries, plus the church with the Michelangelo statue in.I think we went in pretty much all of the museums on the list but most of the museums weren’t that great, the tower was certainly worth climbing the narrow stairs for, although it’s best to do it early morning before it gets busy and before you’ve had too much beer.

De Halve Mann brewery is a must, the tour guide was hilarious and informative, the view from the top of the brewery is stunning and it’s like no other brewery I’ve been round, the bar at the bottom is great too, we had our complimentary glass of beer next to the roaring log fire. 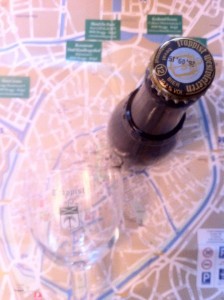 The boat trips are worth a go as it gives you a different perspective on the city, our guide was from England and reminded me a bit of John Cleese, he was great fun and certainly knew his stuff.

I’d say to avoid the chocolate museum, it was pricey, chaotic and the displays were mainly made of playmobil, the demo at the end seemed rushed and you got 1 tiny little chocolate.

Everywhere was really Christmassy and we spent a lot of time in the Markets drinking Gluhwine, eating sausages,crepes or chips n mayo, I’d definitely recommend a visit near Christmas as there was a really nice atmosphere and of course there are lots of Christmas beers to try.

One more thing to look out for is Speculoos, it’s those little lotus biscuits crushed up into a paste…it’s so moreish it’s dangerous.

That’s pretty much our trip to Bruges in a nutshell, we did call in at Brussels on the way home, which had an amazing array of bars but I just didn’t like the place as much, we managed to squeeze in the Cantillon brewery (a must as it’s one of my favourite breweries and the tour includes plenty of beer) along with Moeder lambic (great beer and delicious snacks, especially the lambic cheese spread), Delirium and the Hard Rock Cafe along with the Christmas market and strange Christmas tree, the light show was fab!

Check out more of my photos on Flickr here.