Posted on January 14, 2013 by andyMogg in Food and Recipes 2 Comments

I’ve made this a couple of times now and served it with both Stoemp and skinny fries (the photo is of the skinny fries and salad version), it’s best done in the slow cooker but if you don’t have one you can do it one the stove or in the oven. The stoemp can be pre made then re heated if you are short on time. If you are having a party then you could always cook this and my pork cooked in Kriek and have a Belgian themed night.

When we had it in Belgium it came with apple sauce, which I wasn’t sure would work but it really does, the sweetness works suprisingly well with the beef and beer. 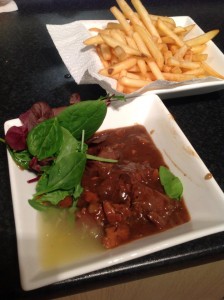