Chaos Theory is Back!

Today saw the exciting announcement that Chaos Theory has been re-released by Brewdog after much nagging by the online community and beery types around the world Brewdog have brought back what is probably my favourite beer that they have ever made…well until I tried the recent collaboration with Mikkeller – I Hardcore You, which I will be writing about soon. 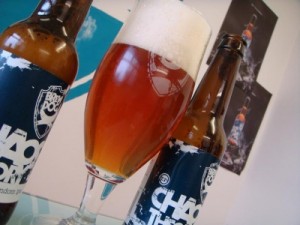 I first tried Chaos Theory back when it was a prototype beer in a test case with Bad Pixie and Zeitgeist, Chaos Theory really stood out and soon became a staple in my beer cupboard until Brewdog inexplicably stopped selling it, much to the dismay of lots of Brewdog fans.

Chaos Theory is a 7.1% ABV Singled hopped IPA that uses  the wonderful Nelson Sauvin hops to produce a great floral beer with some really interesting flavours.

My advice is that if you like IPA, beg, steal and borrow some money to buy a case of this wonderful beer, OK maybe don’t steal it as that will get you into a lot of trouble and stealing is very very wrong.

Not only will you get 12 bottles of one of the best beers Brewdog have ever made you also get a free keyring to boot and you can never have enough bottle opener keyrings.

So get your self over to the Brewdog website and buy some before it’s all gone, hopefully if enough people buy it they will persuaded to make it a regular beer instead of a one off.

Oh and thanks Brewdog for making my day and no doubt getting me into more trouble with my other half for buying more beer that I don’t really need, although I could argue I do need this beer. Let’s just hope it’s as good as I remember.

2 comments on “Chaos Theory is Back!”