Posted on February 13, 2011 by andyMogg in BrewDog, Food and Recipes 1 Comment

Last night @davelozman and his mrs came for tea, It’s always a great night and we usually sup some fantastic beer so I took a bit of a risk and tried to incorporate some beer into the first course. I’ve made beer batter before but only ever for big chunks of fish and I usually use  pretty boring beer with lots of fizz to give the batter a nice lift. However this time I wanted something different, something lighter, crispier and a bit zestier. I’d picked prawns as the items to be battered so now it was just a case of coming up with a beer that would add enough flavour but not so much that Mrs @davelozman wouldn’t eat it, as I know she’s not a massive beer fan. 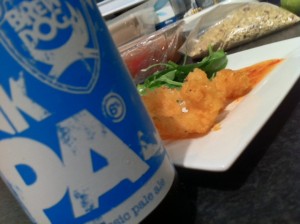 Bitter sweet prawns with a hint of lime!

I was searching through my beer cupboard when I stumbled across a bottle of  Brewdog Punk IPA hidden away behind my few remaining bottles of Punk X and a couple of cans of fosters (don’t ask), the best before date was fast approaching so this instantly became the bottle of choice for the batter.

Now as with most batter I like to have the liquid that I’m using ice cold, I’m not sure of the technical reasons but I just find it gives a better texture, so the chose bottle of Punk IPA spent all day in the fridge followed by 30mins in the freezer.

With the beer sorted I now wanted to spice things up a little, the main was chicken satay from Jamie Oliver’s 30minute meals, so I wanted to add some flavours that would match up to those of the satay, I nearly went for the obvious choice and thought about chucking a load of chilli in but then that would have been easy. Instead I decided on sweet dessicated coconut to take the edge off the bitter beer and a little bit of lime zest to add some zing.

I was quite impressed with the results (I hope Dave was too)  the beer came through along with a little bit of bitterness, the coconut balanced this out quite well and then there was a lovely clean lime finish along with the flavour of the juicy prawns. The coconut also added a great texture to the batter. So I thought I’d share the recipe with you. It’s all a bit rough and ready as I made it up as I went along