Just wanted to say a HUGE congratulations to Stuart Howe From Sharp’s Brewery forwinning IBD The All Party Parliamnetary Beer Group Brewer of the year 2011, It’s thoroughly deserved and long may his success continue. 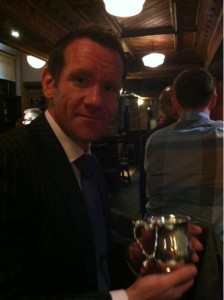 The panel of judges from the Institute of Brewing and Distilling (IBD), this year celebrating its 125th Anniversary, based their decision on Stuart’s commitment to education and development of technical competence and his application of this knowledge in the workplace. The judging panel also praised Stuart’s ability to use that knowledge to sculpt and create exciting new beers.

Dan Rogerson MP, Vice-Chancellor of the APPBG, said: “Stuart is a very worthy Brewer of the Year and joins a prestigious cast of previous winners. He has a true understanding of beer and its endless possibilities. Since he moved to Sharp’s, Stuart has established a reputation for developing new brands and for evolving existing ales. He has played an important part in encouraging publicans and consumers to recognise that beer is the perfect accompaniment to food, working to brew bespoke products which have become well known brands in their own right.

“Stuart set about supporting his colleagues by providing learning opportunities and created a strong foundation for his employees to study and pass IBD examinations. He has overseen a rapid expansion of output, the design and installation of a new brewery at Sharp’s and the growth of Doom Bar which enjoys wide distribution and is known for its consistently refreshing qualities.”

Past APPBG Brewer of the Year winners include Steve Wellington of Molson Coors, Alistair Heeley of Greene King, Dr. Mike Powell-Evans of Adnams and Stefano Cossi from Thornbridge.
Upon receiving the award Stuart Howe said: “This is a massive honour and looking down the list of great brewers who have won the accolade before me makes me very proud. To be named APPBG Brewer of the Year is another dream that working for Sharp’s has helped to realise and I owe a vast debt of thanks to the team at the brewery for all their hard work and commitment in making the beers and the business what it is today. I’m looking forward to continuing our success and building on the great portfolio of beers we already offer.”

At Sharp’s since 2002, Stuart has been instrumental in improving quality, productivity and environmental performance while developing award-winning new brands and expanding production from 10,000 to 110,000 barrels per year. Stuart’s determination and passion has led to Doom Bar
becoming the No 1 selling cask brand in the South West and Wales and the fastest growing cask brand in Greater London1. During this time Sharp’s beers have won over 100 national and international awards for excellence.