I first heard about Coniston IPA when Ian mentioned it in his Meet the Brewer and from his tweets on twitter I knew I had to try some.

So on a camping trip a couple of weeks ago we decided to have a beery night in Coniston town I popped into the Black Bull for a few pints and in the hope of buying some Infinity IPA. I was in luck as I spotted the bright green label in the fridge behind the bar. I promptly ordered a bottle along with my pint of Olivers Ligt Ale, the cheery barman then persuaded me that 1 bottle wasn’t enough and that buying 3 offered better value, as the £10 note I had in my hand had just come out of my other half’s purse I decided it would be rude not to heed the barman’s advice. 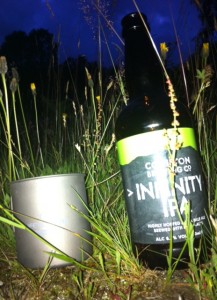 We sat outside in the beer garden and I happily sipped away on my Olivers Light Ale, which was really refreshing and light, hints of straw and digestive biscuit, lightly hopped and perfect for a post walk refresher. Even though I was supping a good ale I couldn’t wait to get stuck into the Infinity, I ogled the bottled longingly until everyone else had finished their beers and we had walked back to the campsite.

Now a lot of people say you need the right glassware for a beer, I’m usually one of those people, but being at a campsite and only having packed what we needed for our intended wildcamp I was all out of branded glasses, fortunately I had the next best thing a Lifeventure Titanium mug, 60g of titanium camping mug, more that used to seeing it’s self filled with beer on a mountain top.

There’s something that just sounds cool about drinking a beer called Infinity IPA from a Titanium mug, so the branded glass freaks can go jump…for now at least.

The only issue with drinking out of such a vessel is that you can’t see what colour the beer really pours, but from subsequent bottles drank from clear glass I can tell you it pours a lovely golden amber colour, with a nice thick off white head, the head was present in my mug, if anything it seemed a little more lively, although that could have been due to the wobble back from the pub.

In the mouth it had plenty of body and good carbonation, there was a lovely slightly sweet biscuity backbone, complimented by bags of zesty pithy lemon and a little bit of marmalade. There’s no sign of the 6% ABV the finish is nicely bitter, that cuts through the sweetness from the malt.

For me it sits really well in the Coniston lineup, which has plenty of variety and enough choice to satisfy just about any palette.  I’d love to try it on cask or even see it in one of the funky little mini casks that I remember drinking the legendary Coniston Bluebird from after winning it in a Trail Magazine competition.

I can also confirm that Infinity IPA goes brilliantly well with Jamie Oliver’s Spicy Southern Sausage Stew, as I needed something with enough flavour to stand up to the spices but didn’t want something with a high ABV, like most of the USA IPA’s I had in the fridge. 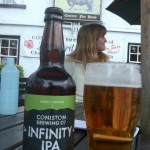 Outside the Black Bull 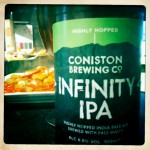 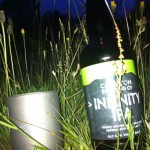 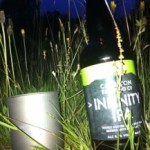