Posted on April 1, 2011 by andyMogg in Food and Recipes 4 Comments

Following on from the cooking with beer competition here is one of the excellent recipes that was submitted, It comes from Leigh of The Good Stuff, which is one of my favourite blogs, full of food and beer stuff. Leigh is a great guy too, knows his stuff, despite supporting Leeds.

So over to Leigh for the recipe: 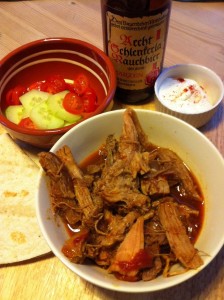 This recipe’s really easy to make – a bit of effort at the beginning and then it just sits in the oven and cooks away. It does have a long cooking time but trust me – it’s worth it.

Serve with Tortilla, Fresh salad, sour cream, and the rest of the Smoked Beer.