Posted on April 15, 2011 by andyMogg in Food and Recipes No Comments

This excellent Pheasant recipe was entered into the cooking with beer competition, Pheasant is one of my favourite meats and this stew sounds absolutely delicious. You can check out the full version on Ale is good, which also has some other yummy sounding recipes on there.

This is just approximately what I put into my stew. As with any stew the ingredients are very flexible. If you don’t like mushrooms, leave them out! Or you could throw in some potato or parsnip. Get the idea? 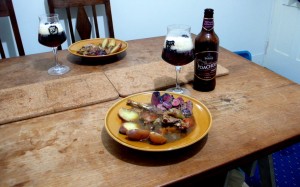 When it comes to stewing my weapon of choice is of the heavy enamelled-iron variety. The stew made with the ingredients above fills a 28cm Chasseur, which is about 26 litres.

Brown the pheasant pieces in batches, this is to ensure the meat isn’t crowded in the pan. After the first batch is browned add a tablespoon of oil to the stewpot between batches. For the amount of pheasant in this recipe I browned the meat in 4 batches. After each batch is browned remove the meat to the bowl with the lardons.

Place the fine-diced onion into the stewpot and fry over lowish heat until it browns, begins to break down, then goes quite mushy. While the onion is frying use a wooden spoon or spatula to scrape the toasty goodness from the pheasant-browning off the bottom of the stewpot.

Before the onion begins to stick pour in the beer, then add the meat, the chopped vegetables, bay leaves and juniper berries. Ensure everything is tightly packed then top the stewpot up with the game stock until everything is covered.

Gently simmer – there should be the barest movement visible and few, if any, bubbles – until “done” (i.e. the meat is tender, but not disintegrating!) My stew was simmering for about 3 hours, which is probably longer than necessary. About 30 minutes before you think the stew is ready brown the peeled shallots in a frypan with a tablespoon of oil and pop them into the stew. (If you put these in at the start they’ll simply turn to mush.) Pop the sliced garlic in now as well.

Do you want to thicken the gravy? The onion will have lent it some body already, any further body will depend on your stock. I like a stew to have a fairly sticky gravy so I thickened this one up a little. To do this strain the stew through a large sieve or chinois, collecting the gravy in a bowl. Put the gravy back into the stewpot and bring it to simmering point. In small pan over low heat melt 25g of butter then stir in 25g of plain white flour. Stir with a small whisk to combine the flour and butter well – and, stirring all the time, gently cook for a minute. Now, a ladle at a time, whisk the gravy into this roux. Initially it’ll thicken drastically, but don’t worry it’ll thin out as you add gravy. To avoid lumps be careful to whisk in each ladle of stock thoroughly and evenly. Continue until your have about a pint or two of thickened gravy, or the consistency of double cream. Finally whisk the thickened gravy into the gravy remaining in the stewpot. (Pass the thickened gravy through a sieve if you think you might have ended up with lumps.) Simmer for 5 to 10 minutes, gently whisking all the while. When complete add the stewed meat and vegetables back into the thickened gravy.

We’re done! Serve with some boiled potatoes, crusty bread, rice, anything really! Served immediately this stew had a light bitterness to it, which prompted me to add a little sugar (in the optional ingredients above.) However, this bitterness all but disappeared after 24 hours in the fridge and I’d say the stew was at its best 2 days after cooking. Served in the photo below with some steamed little red potatoes, and a sneaky addition of pan fried bunny liver and kidneys (I’d been sorting out a few bunnies that evening.)