Cooking with beer – the winning recipe

Posted on March 28, 2011 by andyMogg in Food and Recipes 3 Comments

Sorry it’s taken so long to announce the winner of the wonderful mixed case from My Brewery Tap, we had way more entries to our cooking with beer competition than I ever imagined. There was everything from Pork cooked in beer to nutella and beer pancakes, some of the recipes were incredibly simple others required a bit more efford, all sounded delicious none the less. I was originally going to cook them all but that would take forever.

As a result we had a really hard time picking the winner, so the only fair way to do it was to put everyone’s names into a hat and pull one person out at random.

That one lucky person was… Kathlene Belista with her Beer Xiao Long Bao which not only included beer in the recipe was paired with beer too. 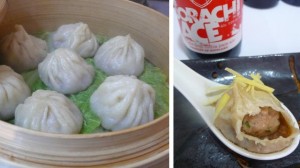 I’ve copied the recipe below and I will be cooking it very soon, I’ll also post all of the entries on here over the next couple of weeks.

It looks like there’s a lot of work involved but the results look and sound delicious, there are more photos and some useful tips on her blog which you can check out here.

We have stock in the freezer on hand as we tend to make large batches of the stuff now and then. Adding a pig’s trotter to a large stock will give it enough gelatin to set the stock for real home-made stock cubes (less messy when defrosted). It is probably when we started doing this more often I discovered the xiao long bao recipe as one of the uses the stock can go to.

Of course, if you don’t make your own stock you can use the store-bought stuff, though I’d imagine it doesn’t have a good intense flavour that you can get when home-made.

This makes only half the amount of stock as the original recipe, so the other components may have a surplus than required for the soup. 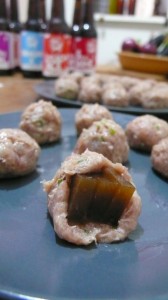 Tweaked the traditional porky filling so it doesn’t overwhelm the beer flavour in the stocky soup.

You can chose the sensible or complicated methods:

It is highly recommended that you do this from scratch, but there are suggestions to replace this with premade wrappers (rolls eyes).

As per instructions on Steamy Kitchen; I converted the American units to be roughly:

To see just how strong this dough gets, see Hiromasa Yamanaka at Jin Din Rou stretching the dough. 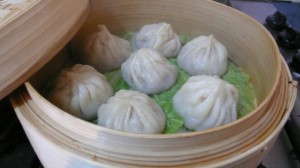 I don’t have Chinese black vinegar at hand so I made a mix that incorporated more beer!

If you are not equiped with another pair of hands, I suggest to make small batches of wrappers at a time and then fill them. Otherwise, do as the pros and designate tasks to speed up the process.

If you intend to use the fast method just simply dice the solid stock and mix well into the filling.

If you were like me, the ‘cube’ method involves cutting the solid stock into cubes then cover each (or a lump of squares) with the mince filling. As handling the mince directly is sticky business, lightly oil you hands with sesame oil when doing this.

Refrigerate the mince (normal) or balls (cube) to be ready for the next stage.

The filling ‘balls’ final size for me was about 3cm (or slightly smaller) in diameter if you use the cube method.

You’ll be stuck near the floured surface a while; ensure you have flour handy for dusting. I copied a method I saw on the interwebs, though I wish I was that fast..

If you are not alone, you can speed things up by passing the completed wrappers to.. 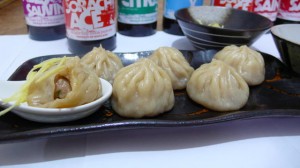 Serve hot with julienned strips of ginger and the dipping sauce. If you don’t want to squirt yourself or others with the hot soup, read: Rasa Malaysia’s tips. Basically the procedure is:

I don’t recommend the cube method as I found it to use far more mince filling than what the original recipe intended. I found this batch to be on the meaty side (but still tasty).

Pretty good for my first (but not last) batch of xiao long bao!

Since I used the amounts for 4 (American) cups of soup I had leftover wrapper dough and mince filling. I intend on seeing if gyoza can be made with the wrappers and mince: just add some shredded cabbage to the mince and proceed as normal!

Apart from dumplings, the mince looks awfully tempting to be a spring roll filling. Or “Lumpiang Hubad” (‘naked’ lumpia/spring rolls: referring to the lack of wrapper) perhaps? I have seen similar mince balls that are cooked in a soup and served with rice noodles.. Too little leftovers to try all of the above!

3 comments on “Cooking with beer – the winning recipe”