Posted on July 28, 2010 by andyMogg in Beer Reviews, Breweries & Pubs, Other Breweries 9 Comments

When we were at Twissup in Burton Upon Trent, Kristy kept mentioning that she was going to revolutionise the way people drank “beer” at home.

None of us quite knew what to expect but were all secretly hoping that it involved White Shield and P2. A couple of weeks later a package arrived on my doorstep…well actually it arrived at the post office and I had to go and collect it, where it was promptly dropped by the post lady, fortunately the contents bounced. 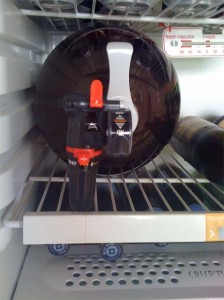 It turns out this bouncing package was the revolution, It was a system called Home Draught. Home Draught is basically a 10 pint bottle with a little Co2 canister attached. This Co2 canister needs to be twisted to release the gas, in theory keeping the contents carbonated and producing a pub quality pint from the little tap every time.

The system fit in my fridge quite well once it was removed from the box, I left it to chill for 24 hours and then followed the instructions included. This simply involved removing a tab, twisting the canister then flicking another tab to release the tap.

Once the tap was pulled the Coors belted out at a rate of knots, it kind of caught me by surprise so I ended up with half a glass of head and half of Coors. The second pint was much better with almost the perfect head to pint ratio.

To be brutally honest Coors Light isn’t to my taste, although I did share it with a few people who do like it and all said they would buy it if the price was right.

The system it’s self works really well, It took me 47 days to pull the final pint and it came out quite well, it was a fair bit hazier and the head was thinner but it tasted just the same.

The packaging and most of the gubbins that make up Home Draught are apparently recyclable, but it’s a shame you can’t replace the C02 canister with the little ones you can buy from homebrew shops as it would make a great vessel for home brew.

I’ve got one with Grolsch in which I’m taking to a stag do at the weekend so will get some more feedback then.

Fair play to Molson Coors for trying something a bit different, I can’t help but wonder what this would be like with some proper craft ale or a USA style IPA in….