Posted on November 16, 2010 by andyMogg in Beer Reviews, Cumbrian Legendary Ales No Comments

An 8% beer from Cumbria – yup you read that right, I know it’s quite a rarity for a high ABV beer to come out of Cumbria  with only a few brave people like Hardknott Dave, Strigers Beer and the odd special from Keswick brewing anything other than ~4% “sesison beer”.

Croglin Vampire from Cumbrian Legendary Ales is not a traditional syle ale either, it’s actually a “Doppelbock” which is generally a strong, malty, dark lager type beer originating from Germany. 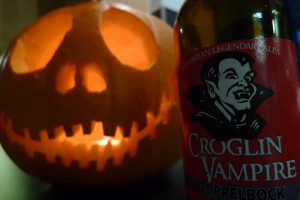 As a result it pours a lovely deep ruby red colour with a really thin off white head, There aroma is almost none existent, with just a hint of malt and alcohol coming through.

It’s got a lovely silky mouthfeel and leaves a lovely trace on the glass, a bit like when people say wine has “good legs” , Flavour wise it’s malty sweet, kind of like bonfire toffee coated with dark chocoalte, without being over the top sickly sweet, theres bags of deep rich fruit, cherries, raisins, plum and some apple.  It finishes with a bitter sweet note, like a good quality high cocoa dark chocolate mmmmmmmm delicious.

Croglin Vampire is a cracking beer no wonder it’s recently won some awards.  I was seriously impressed, as a result I recently tried a couple of their other beers when in Tweedies in Grasmere, while not quite as knock you’re socks off as Vampire they were good solid ales and they went down a treat after a day out in the cold and I’d happily pay for them again.