In anticipation of my trip down to the brewery to deliver some of my Chilli Up North Chillis to Stu and give him a hand in brewing  Ring of Fire beer, I thought I would review another one of Crown’s beers
(i’ve already done U.I.P.A , Wheetie Bits and the previously mentioned chilli beer Ring of Fire) 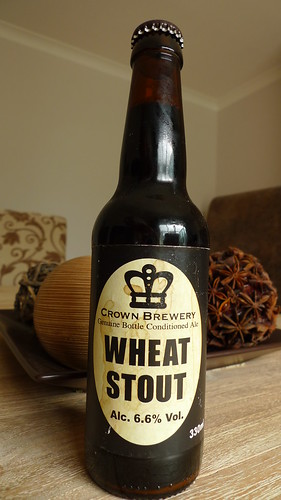 Wheat stout pours very well, with not too much fizz, it has an amazing really really dark brown head which lasted extremely well (I will get a picture when i open another bottle), The head might actually be slighter darker than the one on the Thornbridge Bracia i had a few weeks back.

It had a lovely wheat, vanilla smell with a little hint of yeast, it was surprisingly light for a stout of over 6%,  i would probably class it as medium bodied, which to be fair is just about right as you could quite easily drink a bigger bottle of it.

Taste wise it was lovely it had a lovely deep roasted flavour with hints of the vanilla and yeast from the aroma coming through, there was a little bit of sharpness in the finish which was just enough to keep your thirst going and help the beer slip down.

I was pretty impressed with Wheat Stout, it wasn’t quite as complex as the Bracia. and maybe not as well finished but it was still a bloody good beer and something i will happily spend my hard earned cash on.