This was another of the beers that @crownbrewerstu sent me.  After trying the Ring of Fire and Unpronounceable I.P.A I was really looking forward to this one, mainly because the other two had really surprised me and i thoroughly enjoyed them. 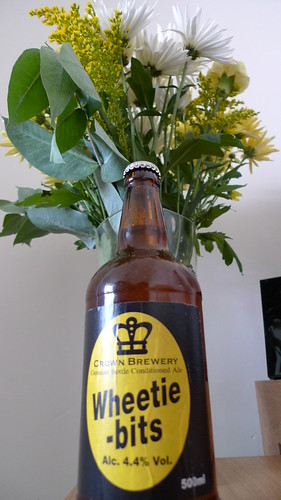 The beer opened with a real fizz and started to foam out of the bottle so i quickly poured it and allowed it to settle. It had a really good head and was a lovely golden colour with a fair bit of  “wheat beer” haze.

The aromas were spicy and fruity with a tiny bit of wheat and yeast, there was also something  sweet about the smell, enough to make Emily actually say it smelt nice, which i think is possibly a first when it comes to beer.

The first sip was lovely, the original fizziness that burst from the bottle when it was opened had almost disappeared giving the beer a lovely texture, it was light but really smooth, in fact much smoother than i was expecting.

The taste was great,it was light and well balanced with a nice bitterness, a good amount of citrus comes through as your are drinking it which helps cut through the wheat and makes it slide down very easily making it an excellent drinking beer.

Now here comes the real shocker,  Emily absolutely loved it, i nipped out of the room and said have a sip of that, when i came back she had poured half the bottle into her glass.

I asked her what she though and she said it was lovely, light and fruity,  just how she likes it, she even picked up the white chocolate hint that is mentioned on the bottle. She isn’t usually a fan of beers with wheat in but this seems to be the exception to the rule.

This however is bad news for me as i only have one bottle left and i have had to hide it from her, so it looks like i will have to order some more from Stu very soon.

Overall i think this is cracking beer that tastes great chilled or at room temperature, it’s not overly complicated, bitter or sweet, it is just about right.

We had it with curry and it handled it really well, it would probably go with just about any dish.