Last year I was lucky enough to be sent a few bottles of Daas Organic beers which I really enjoyed (see here). So when They said they were sending me some of their new much anticipated Ambre beer I was quite excited.

For those of you that aren’t familiar with Daas, 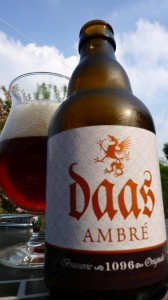 they are premium organic Belgian beers, that use fresh Wallonian spring water, organic wheat and barley  so their beers are certified organic by the Belgian and UK Soil association.

The new Ambre beer weighs in at 6.5% ABV which is the same as Daas Blonde. Daas Ambre pours a lot darker than the blonde, as you would expect, it smells lovely, quite sweet and fruity, there is  banana and toffee on the nose with hints of spice and possibly a bit of cinnamon.

In the mouth it feels great, just the right amount of carbonation gives it an almost silky quality, it laces your mouth with malty caramel banana. The spice from the nose come through which balance really well with the sweetness and prevents it from being too sweet.

The balance results in a really drinkable, refreshing beer, I sat and supped this in the garden on a hot sunny day and it went down a treat, I could have quite happily polished a few more bottles of, It’s one of those beers that really does quench your thirst, isn’t too complicated and best suits sunny afternoons in the garden, although the 6.5% is hidden really so I would advise not using it as a session beer…